The power of compound interest is a miracle for shareholders -- but you only receive that gift if you stay in your stock for a long time.

Some investors have a habit of checking their stocks every day. I do it too. And I read up on my stocks all the time. If I see a big price move, I check the headlines and try to figure out the reason behind it. I want my stocks to go up, and I don't want them to go down.

The pace of some of these price moves can be very quick. If you're an investor like me, it's not unusual to see some growth stocks have 10%-plus price swings over the course of a single day. These quick changes can spark emotions. A price jump can get me excited, maybe even a little greedy. If the news is bad or the stock price drops, I might get upset, or possibly even fearful.

These attitude changes are natural. But if you let them get the best of you, they can lead to investing mistakes, the worst being "buying high and selling low." That's not good.

So how do we combat this? Perhaps it would help to think of buying a stock as something akin to buying a home. Let's explore this idea. 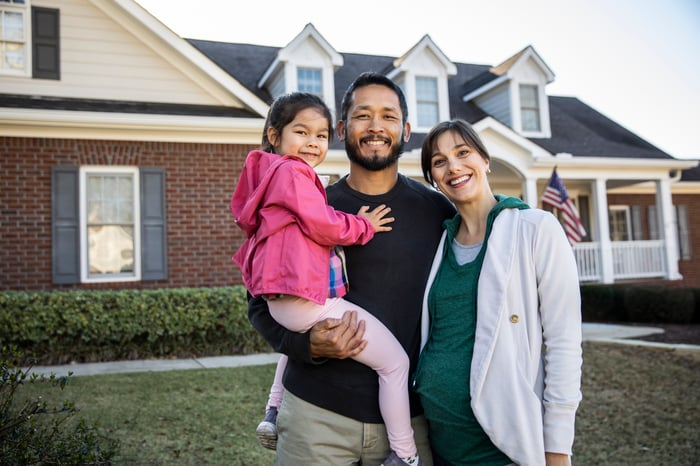 Make your stock a home

The housing market is opaque and slow-moving. It doesn't do much good to check the value of your house every day. Its value doesn't change that much. Maybe a house-flipper might closely monitor house price fluctuations, but most people just buy a house and live in it.

You might change houses if you are changing cities or if your family is getting bigger or smaller. My parents bought their last house in 1982 and lived there for 39 years. The magic of compound returns made their long-term home investment increase in value. When they sold their house, they made a very nice profit.

During the time they owned their home, the broader housing market had a lot of ups and downs. Among the biggest fluctuations was during the housing bubble in the early 21st century and then the 2007-09 housing market crash that followed it. But my parents liked their house and their city, and there was no reason to sell, so the volatility was mostly irrelevant to them.

Because the stock market is open Monday to Friday from 9:30 a.m. to 4 p.m., stock investors can see all the price shifts in real-time. There is nothing like that in the housing market. So for my parents and many other homeowners, ignorance actually is bliss.

Price shifts are a silly reason to sell

Imagine you and your family bought a house 20 years ago. Coincidentally, another family owns the house next door. Your two houses are very similar in size, features, and amenities.

One day, your neighbors decide to sell their house. Since you're friends, you discuss the valuation. Your neighbor says, "We think it's worth $500,000. That's what the realtor says. So that's what we're asking."

Actually, you probably don't do that at all. After all, you have no obligation to sell your house right then. It's the same house it was yesterday. It's already valuable to you. You may be disappointed that the price tag isn't as high as you thought it was, but you don't need to sell. And, more importantly, you don't need to panic.

Just to be clear, if you find something wrong with your house (or with a company you own stock in), it's fine to admit a mistake and sell, getting what you can out of it. But that's a fundamental analysis of value, not a reaction to market prices.

An advantage the stock market has over the housing market

What do you do if your stock is shooting higher and higher or the price suddenly drops 10%? In the real estate market, you probably wouldn't do anything until you decide you need to sell, for whatever reason that is. That's a good attitude to take into the stock market as well. Let your winners run. And you should sell your stock if the company is no longer doing what made you buy it in the first place, not because of a temporary price drop.

But stock ownership does offer one major advantage to homeownership as it relates to selling. Your house isn't really divisible. You can sell your house once, and that's it. In contrast, one way to survive and thrive in the stock market is to sell a sliver of your big winners to lock in the profits and put those funds where you want or need them to be.

One of my family's favorite stocks, Shopify, has seen its price go up 2,845% since we bought it. After we had a 25-bagger or thereabouts, we sold 10% of our shares. Another time, we sold a tiny percentage of Intuitive Surgical, which had also had a significant share price gain. Both of these sales might be considered mistakes in that the prices of each kept rising after we sold and we missed out on some further gains for the portion that was sold. All things being equal, it would have been smarter just to hold on to the shares. But we bought low and sold high, and used the profits for other things, which is what you are supposed to do in investing.

It's rather nice to be able to sell a slice of a great company when you need the cash. For instance, this year my car died, and I had to buy a new one. I sold some shares of Carvana stock (another big winner for us) and bought a new car from Carvana, getting some amazing customer service while doing so. We're still happy Carvana shareholders. And probably sometime in the future, I'll be kicking myself for that time I sold some of our shares.

What did we learn from this thought exercise?

When you need to sell your house, you'll sell your house. Treat your stocks the same way. Ask yourself why you're selling. If your only reason is "because the stock is cheaper than it was," that's a very bad reason to sell.