AbbVie is about to lose its patent on the world's top-selling drug, but it may not be as bad as it sounds.

Pharmaceutical giant AbbVie (ABBV -0.76%) has built a good business on its long-running exclusivity of the world's top-selling drug, Humira, used for treating arthritis. However, Humira will lose its patent protection in 2023, and a handful of biosimilars -- that is, "copy cat" versions of the drug made by competitors when a patent expires -- will enter the market.

Competition for Humira may seem scary since it represents more than a third of AbbVie's sales. But before investors panic, let's look at why things may not be as bad as they seem.

AbbVie has been preparing for 2023 for a while

It shouldn't be a stretch to call Humira's upcoming patent expiration the "elephant in the room" with AbbVie's management. The company knew this was coming and has steadily taken steps to counter the looming drop in sales that will likely occur as competing products begin to flood the market at lower prices. 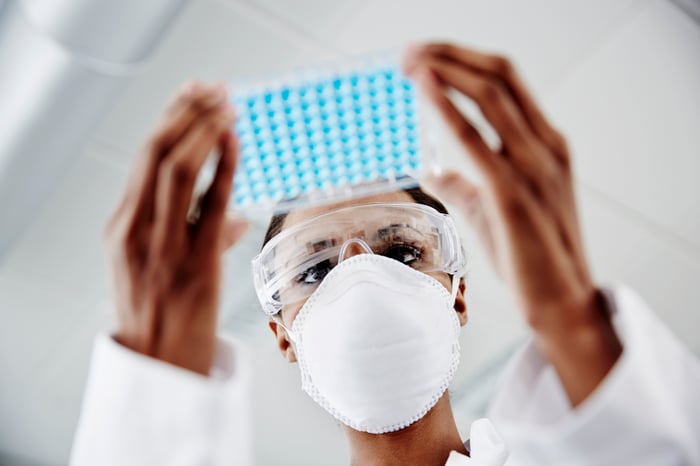 For starters, AbbVie has brought new drugs to market that treat similar conditions as Humira does but with potential advantages. One of them, Skyrizi, could require fewer doses; the other, Rinvoq, could be taken as an oral pill instead of an injection. While these new products are much smaller than Humira, they are growing rapidly. Skyrizi's sales through the first six months of 2021 are up 98% year over year to $1.2 billion while Rinvoq's sales are up 190% to $681 million.

These products continue to grow sales, which should help fill the hole that Humira leaves in 2023. Let's also not forget that it's still unknown just how sharply sales for Humira will actually drop off; it's unlikely they will drop to zero overnight. Patients and doctors may need time to trust the new biosimilars, and some patients may prefer to stick with the "name brand."

AbbVie also made a significant acquisition, buying pharmaceutical company Allergan last year for $63 billion. This brought a whole pipeline of products to AbbVie, including Allergan's famous Botox brand. The combined entity is now less reliant on Humira's sales than it has been in the past. While it's still a big contributor at 37% of sales in the first half of 2021, that's down significantly from the 57% Humira accounted for in 2019.

Its excellent dividend is well-covered

One of the reasons many people invest in AbbVie is the company's dividend. With a yield of more than 4.7%, it gives shareholders a significant income stream along with potential upside in the share price.

As long as AbbVie can do a solid job replacing lost Humira sales, the company should have little issue continuing to pay a large dividend while developing new drugs in its pipeline. The dividend itself has grown at an average rate of 18% over the past five years, so that might slow down as Humira fades.

However, the dividend payout ratio is just 45% of cash flow, so it would take a catastrophic collapse for the dividend to be threatened, in my opinion. Analysts are still projecting positive earnings growth over the next three to five years of about 4% per year.

Stock is valued like it's going out of business

It's fair to be a little skeptical; competition for your best product -- and the top-selling drug on Earth -- is an adverse event no matter how you spin it. So suppose we would like to discount the valuation to justify the risk of investing in AbbVie as it loses Humira.

The stock has traded at a historical average price-to-earnings ratio (P/E) of nearly 21 over the past decade. Analysts estimate AbbVie's full-year 2021 earnings per share will be $12.60, giving the stock a P/E ratio of just under nine. In other words, the stock is trading at more than a 50% discount to its "normal" valuation.

Let's assume that AbbVie sees a dramatic decline in Humira sales right when it loses exclusivity (which I think is unlikely). If the company saw its earnings fall 25%, the resulting P/E ratio would be just 11.5, still a cheap valuation. AbbVie will likely get even less expensive in 2022; analysts expect EPS of $13.95, or 10% higher than 2021 estimates.

Are there risks in AbbVie with it losing exclusivity to Humira? Yes, of course. However, it seems fair to argue that investors have overreacted, and the stock has gotten far too cheap for investors to ignore. The risks could be more than factored into today's prices at this point.