Amazon provided an unusual set of fourth-quarter guidance targets along with its third-quarter results on Thursday, Oct. 28.

Sales exploded for Amazon (AMZN -1.60%) when the pandemic began. That shouldn't come as a surprise, considering that millions of people avoided visiting stores as the coronavirus began to spread. The leading e-commerce retailer with speedy shipping on almost everything a household could need seemed built for a moment like this.

What has been surprisingly impressive is Amazon's ability to retain the business it gained during the pandemic lockdowns. Even with economies reopening worldwide, Amazon is posting remarkable sales figures quarter after quarter. 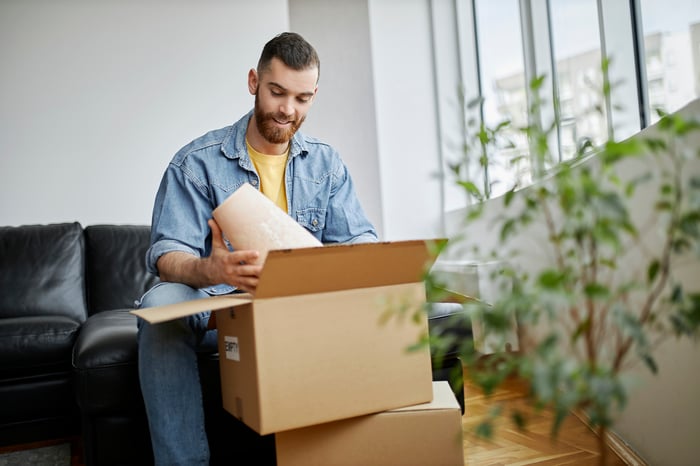 Amazon is expecting to reach five quarters in a row with at least $100 billion in sales. Image source: Getty Images.

Four quarters in a row with over $100 billion in sales

Amazon reported $110.8 billion in sales for the third quarter ended Sept. 30. That was a 15% increase from the same quarter last year and marked Amazon's fourth consecutive quarter with $100 billion-plus in revenue. To help meet that demand, Amazon has nearly doubled its operations capacity in the last two years. It's not an easy task fulfilling quarter after quarter of $100 billion of sales.

Costs are rising to staggering levels as the company works to fulfill orders worldwide amid the ongoing pandemic. In the nine months ended Sept. 30, total operating expenses reached $311 billion. That's up from $245 billion in the same period last year. The increase in expenses caused operating income to fall by $1.3 billion in the most recent quarter compared to last year. The trend has investors worried, and it could partly explain why Amazon's stock fell 2% on the day after it reported Q3 earnings results.

Record holiday sales in Q4 will come with lower profits

Amazon's management expects more of the same in Q4. The company is projecting revenue from $130 billion to $140 billion, suggesting revenue growth between 4% and 12% from the same quarter last year. Completing and fulfilling sales of such magnitude will be an arduous task in the current business environment. Supply chain disruptions abound: businesses are reporting shortages of workers, and costs of materials and wages are rising.

Amazon management quantified the impact of these costs in the conference call following the Q3 earnings release: "We estimate the cost of labor, labor-related productivity losses and cost inflation to have added approximately $2 billion in operating cost in Q3, particularly in August and September. Our Q4 guidance range anticipates that these costs will approach $4 billion in Q4 as we see a full quarter's impact of these effects and a higher seasonal unit volume."

Because of the high-cost environment, Amazon expects an operating income of $1.5 billion at the midpoint. That may seem like a lot of money, but it's only 1.1% on sales of $135 billion.

Amazon has chosen to favor the customer experience over operating profits in the near term. It may hurt investors to see minuscule profit margins, but it should help Amazon gain customer loyalty and keep customers for the long run. That growth-promoting strategy looks like a smart tradeoff.