These retailers are making lists of ways to win the season -- and checking them twice.

The coronavirus put a serious damper on last year's holiday cheer. But this year, people are ready to let go of some of that pandemic angst and embrace the kind of holiday season they grew up with. For many, those festivities begin now with holiday shopping.

Mastercard SpendingPulse, the eponymous company's market intelligence and retail analytics arm, projects holiday retail sales rising 7.4% from a year ago and 11.1% on a two-year basis. This is expected to be fueled by both persistent consumer demand and a rebound of 6.6% in in-store shopping. That second item should be particularly exciting for real estate investors.

Let's take a look at a few retailers that are especially well-poised to take advantage of this year's projected increase in holiday cheer. The stores featured here are combining impressive early holiday sales with partnerships to sparkle big this season. 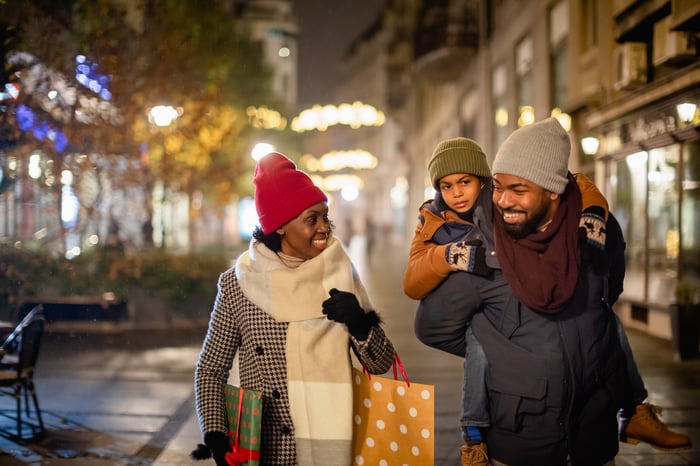 Many retailers rolled out big Black Friday-style sales early this year to encourage shoppers to get a head start on holiday shopping and beat the supply chain crunch.

Walmart's (WMT -0.73%) offers include bargains on everything from tech and toys to apparel, home goods, and beauty. In addition, the company has also taken advantage of the opportunity to further promote its Walmart+ membership, offering early deal access to members. And to bring customers inside, many of their top holiday bargains are available in store only.

The retailer has partnered with Netflix to carry branded merchandise based on some of the streaming service's most popular shows, including Stranger Things and Squid Game, and even offers a dedicated Netflix hub on its website. And in continuing efforts to resolve supply chain issues, Walmart is chartering its own ships and holding a supply chain hiring event.

Of course, Target (TGT 2.23%) is offering plenty of early holiday deals as well. Here, bargains can be found on just about every category of merchandise, including apparel, electronics, and kitchen equipment. The retailer is also expanding its partnership with Disney, adding over 100 Disney Store shops inside its stores in time for the holidays.

And like its competitor Walmart, Target has also chartered ships to help it stay ahead of some of the supply chain issues facing retailers.

Macy's (M 1.58%) has announced its early Black Friday deals a bit behind some of its competitors, but they include impressive bargains on everything from apparel to home goods. As consumers are expected to spend more this holiday season, it makes sense to assume that the higher-end merchandise that retailers like Macy's tend to offer could do well this year, given the right deals.

Macy's has also partnered with Toys R Us ahead of the season, helping to rescue the toy store many parents shopping for their own kids grew up with. That merchandise will be available exclusively on the Macy's website this holiday season and will be hitting the retailer's stores next year.

A festive start to the season

Getting people into physical stores will be a keenly watched event, especially by commercial real estate investors. But, thankfully, more people are expected to embrace the nostalgia of their holiday shopping pasts this year over ordering all their gifts online in their PJs.

That said, brands doing well online will be better positioned to keep their current physical stores open and -- ideally -- open new ones. And, of course, any form of retail commerce is excellent news for investors at large.

Between the pandemic and supply chain issues, investors exposed to retailers have been a bit frazzled heading into the holidays. But from early holiday sales to smart partnerships and even some creative supply chain strategies, there are several reasons to believe they should have a happy holiday season.