Disney reports financial results on Wednesday, but it also is celebrating Disney+ turning two and the arrival of British tourists to its stateside theme parks.

There are a lot of reasons to get excited about Walt Disney (DIS -0.15%) as it gears up to post results for its fiscal fourth quarter on Wednesday afternoon. There is growing momentum for its theme parks, movies, and even its recently restarted cruise line operations. Disney+ continues to be a rising star in the premium streaming market despite getting ready to blow out the two candles on its birthday cake later this week.

Expectations are high, but somewhat surprisingly the stock is not. Disney is in much better shape than it was a year ago, but the stock is still trading 2% lower year to date through Monday's close. A strong report on Wednesday would naturally get the House of Mouse out of the red. 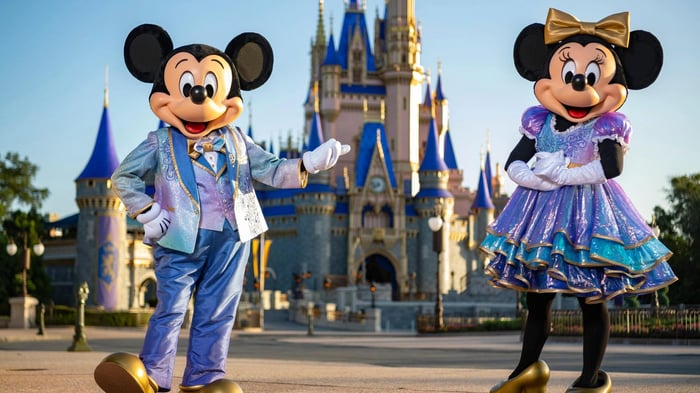 Wall Street pros see Disney earning $0.44 a share, bouncing back from a rare loss during last year's pandemic-smacked climate. Those same analysts are projecting $16.29 billion in revenue, 10% above where it landed a year earlier.

These are impressive year-over-year comparisons, but we're not close to peak Disney just yet. Even if Disney beats expectations -- as it has more often than not -- it won't be anywhere close to the $19.1 billion it generated in revenue two years ago for the same fiscal bookend quarter.

The results should still be strong. Disney's Marvel was behind the summer's two biggest theatrical releases. Its cruise line resumed sailings during the quarter. Broadcasters are seeing advertisers spend more again to reach consumers.

The news should also be encouraging on the theme park front. Comcast's Universal Studios -- Disney's largest rival when it comes to gated attractions on both coasts -- said that its Universal Orlando resort in Florida just posted record earnings. SeaWorld Entertainment -- the marine life theme park operator with competing attractions in Central Florida and Southern California -- opened lower on Tuesday morning after posting disappointing financial results, but a closer look shows that attendance exceeded expectations. It was SeaWorld's inability to monetize its better-than-expected crowds that led to the top- and bottom-line miss. Disney should fare much better with its nose for merchandising and how it has prioritized available park reservations to favor the more lucrative visitors either staying on-site or purchasing high-priced single-day tickets.

Disney+ is the wildcard variable. The streaming service is the reason why Disney shares moved higher last year despite so many of its operating segments being stung by the pandemic. It's also likely why the stock has taken a step back this year even as the rest of its businesses have come back online. A strong or weak quarter of net additions for the premium streaming platform has dictated which way the stock moves after earnings.

The real upside here could be in how well the current quarter is shaping up to be. The arrival of new premium add-ons at Disney World last month that should be coming to Disneyland in a few weeks will take per-capita ad revenue higher for the media behemoth's theme parks. Disney World also kicked off an 18-month celebration last month to commemorate the resort's golden anniversary. Marvel movies continue to be top draws at the multiplex.

This week alone, it's not just Wednesday's quarterly update that could give the stock a boost. After 19 months of travel restrictions, British tourists were able to visit Disney World starting on Monday. On Friday we have Disney+ Day, celebrating the launch of the game-changing streaming service two years earlier.

The Disney+ birthday celebration won't be limited to the platform itself. Disney is celebrating with promotions at its theme parks and its online store. It's even rolling out collectible non-fungible tokens (NFTs). It's a big week for Disney. It's a really big week for Disney.