Gannett (NYSE:GCI), the largest newspaper publisher in the country, generated diluted earnings per share of $0.09 on total revenue of more than $800 million in the third quarter. Both numbers missed consensus estimates from analysts. However, I saw a lot of positive trends as the company continues to pay down debt and transition its business to a more digital model that is better positioned for long-term success.

All in all, I believe the company's turnaround story is still intact. Here's why.

In 2019, Gannett completed its merger with New Media Investment Group, the parent company of Gatehouse Media, to become the largest newspaper publisher in the country. Gannett owns big newspaper brands like USA Today, The Detroit Free Press, and other large regional properties, along with hundreds of smaller newspapers. Management likely saw the increased scale as necessary to survive and succeed in what has become an incredibly difficult industry. But to make the merger happen and pay off other obligations, Gannett took a $1.8 billion term loan with a high 11.5% interest rate.

While the company paid off very little of this debt during the worst part of the pandemic, Gannett has since paid down more than $330 million, leaving it with outstanding debt of roughly $1.4 billion at the end of Q3. Gannett has also taken advantage of the low-rate environment to refinance the debt and now has a blended interest rate of 5.81%. The new loan agreements also enable the company to begin conducting share repurchases of up to $25 million each quarter. 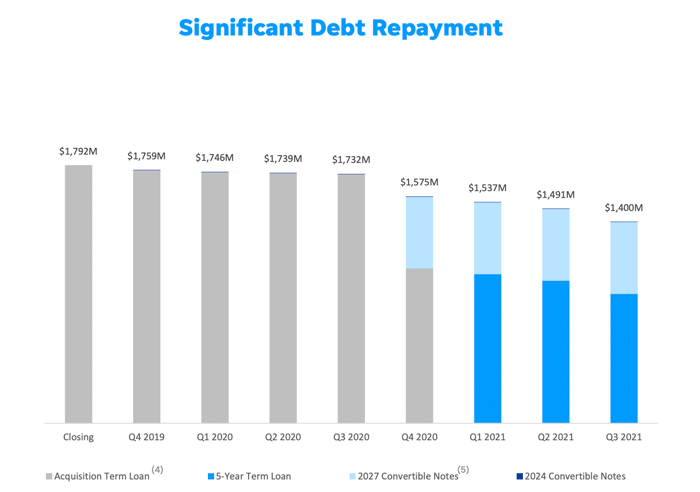 The repayments over the past year have reduced Gannett's net leverage ratio -- that is, its net debt to earnings before interest, taxes, depreciation, and amortization (EBITDA) -- from 3.8 at the end of Q3 2020 to 2.7, which is still high but clearly trending in the right direction. 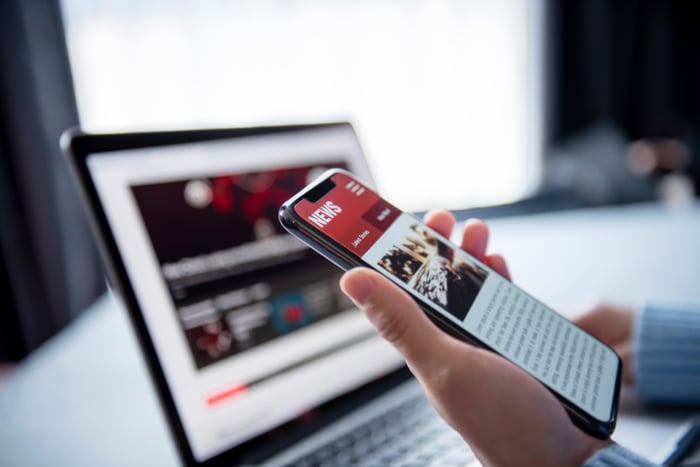 The traditional newspaper business has been a tough sector for quite a while now, but management has been making noticeable moves to get into new businesses and shift the revenue mix away from traditional circulation and print advertising revenue.

Paid digital subscribers grew another 164,000 in Q3 and now total 1.54 million, up from 1.06 million just a year ago. Management has set an ambitious goal of growing digital subscribers to 10 million in the next five years. Digital advertising and marketing services revenue made up nearly 28% of total revenue in Q3, up from roughly 25% one year ago.

Management is also moving into new verticals that look promising. Revenue from the company's new events business is still a small contributor to total revenue but has roughly tripled from the first quarter of the year and still seems to be somewhat affected by COVID. Additionally, the company is leveraging its sports news coverage around the country to launch a premium sports subscription service called USA Today Sports+.

Gannett has also announced a promising partnership with Tipico, the top sports gambling service in Germany. The big strategy in the sports gambling world these days is to use content to bring in more gambling activity, and Gannett is well-positioned to do this with its 1.5 million digital subscribers and 250 daily local news sites across the country. Not only will Gannett make $90 million over the next five years for advertising Tipico through its media channels, but CEO Mike Reed said on a recent podcast that the deal could also be worth hundreds of millions in referral fees over its life for each person directed from Gannett's sites to the Tipico platform.

The turnaround is happening

Gannett looks like a clear turnaround story in the making. We'll have to wait and see if the company can grow to 10 million digital subscribers, but the company is making progress on reducing its debt, and management says that continuing to pay down that debt is a "very high priority."

Additionally, the shift from print to digital revenue is occurring while the launch into new businesses, particularly sports gambling, looks like a very real and exciting opportunity. Gannett has made more than $3.2 billion of revenue over the past 12 months and has a market cap of roughly $800 million, so I think this is a stock that can go much higher if things keep trending in this direction.