There was a lot to like in Walt Disney's (DIS 0.83%) financial update on Wednesday afternoon, but all it took was weak net additions at its Disney+ platform to sink the stock. Shares of Disney moved lower despite encouraging top-line results, fueled by a dramatic turnaround at its iconic theme parks.

The 26% surge in revenue for the fiscal fourth quarter was enough to lift all of fiscal 2021 into positive territory. It's a modest 3% increase, but it sets the stage for a healthy recovery with analysts targeting top-line growth in the low teens for fiscal 2022. Investors were holding out for a bit more, but that's not a deal breaker for a stock that is already trading lower year to date. Disney's adjusted profit of $0.37 a share also fell short of Wall Street bottom-line targets, but turning the corner with so many moving parts and rising costs is going to be lumpy. 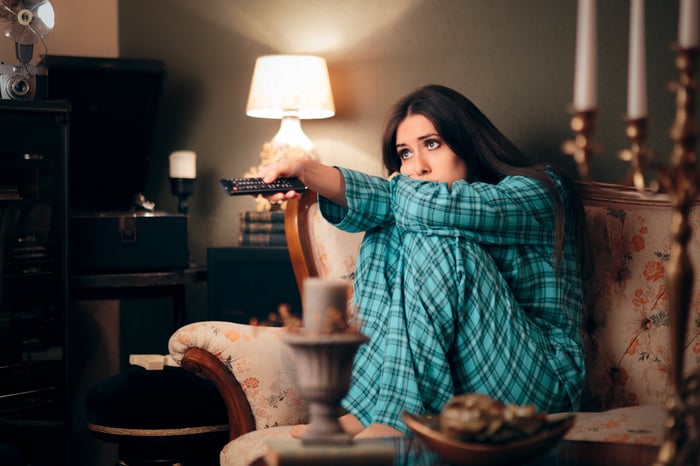 Disney did technically miss on both ends of the income statement, but that's not the headline bringing the House of Mouse shares down. The focus is negative on the plus, as in Disney+.

There's no denying that it was a weak performance for the premium streaming service. Disney+ entered the fiscal fourth quarter with 116 million subscribers, growing its audience by 12.4 million viewers in the fiscal third quarter. A slowdown was inevitable, and CEO Bob Chapek even warned as much in late September. With less than two weeks left before the end of the fiscal fourth quarter, Chapek said net additions for the period would be in the "low single-digit millions of subscribers" for Disney+.

The bare minimum based on that metric -- with "millions" being plural -- would be 2 million. Disney's 2.1 million net additions to get to 118.1 million is essentially the worst-case scenario, and it's why analysts thought the media giant would be north of 120 million Disney+ subscribers at this point.

Why are we so fascinated by Disney+? It's a game changer, sure. However, have you taken a really close look at Disney+ relative to the entire business? For starters, Disney has said that it doesn't expect Disney+ to turn a profit until at least 2024. We'll be knee deep in Avatar sequels by then!

More importantly, Disney+ accounts for less than 8% of the total current revenue. Multiply the subscribers by three months at the uninspiring $4.12 average monthly revenue per subscriber and you are at less than $1.5 billion in quarterly revenue for a media stock that just generated $18.5 billion. You know which Disney streaming service is topping $1.5 billion in revenue? Hulu. Tack on the Hulu-branded live TV streaming service -- good for another $1 billion for the quarter -- and you are at more than $2.5 billion or nearly 14% of the revenue mix.

It's OK to get excited about Disney as a streaming service stock. Disney+, ESPN+, and Hulu are all growing at 20% or better over the past year. However, Disney+ is just one lever that Wall Street is fixated on, when there's a better story to tell in sizing up all of the moving parts of this dynamic and massive media empire.