While several EV stocks have sizzled this week in the wake of Congress passing President Biden's $1.2 trillion infrastructure bill the bumper debut of EV start-up  Rivian Automotive, Volta in particular caught investors' attention Friday by delivering a stellar quarterly earnings report. Dig deeper, though, and you might begin to question the rally in Volta's share price.

Volta builds and operates EV charging stations equipped with screens  that can be used to display advertising. In fact, it looks more like a media stock today, given that it derives the bulk of its revenue from delivering advertising content across those displays. In the third quarter, for example, Volta's "behavior and commerce" segment brought in almost 87% of its total revenue of $8.5 million. 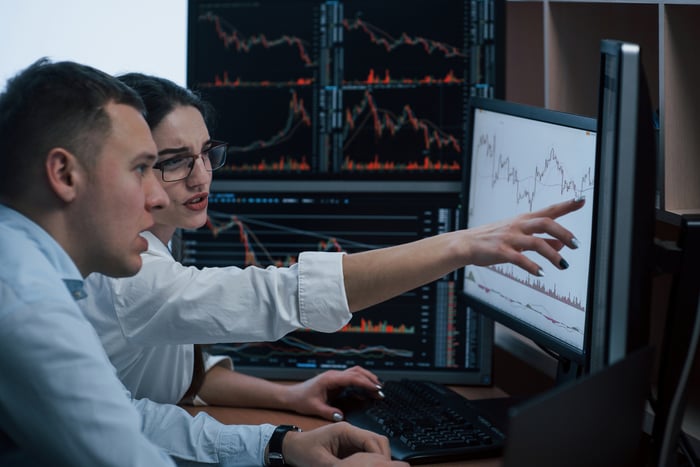 Yet there's no denying this business is growing rapidly -- revenue from the segment more than tripled year over year in Q3. By comparison, revenue from network development slumped by 47% as fewer customers purchased Volta's charging products.

Overall, Volta's total revenue soared 77% year over year in Q3, but it still generated a huge net loss of $43.1 million as expenses surged. In the prior-year period, it booked a loss of just $14.5 million. Management pointed to one-time items like bonuses, commissions, stock-based compensation, and professional fees as the primary drivers of those higher expenses.

Volta's share price gains are partly being driven by the market's EV mania -- investors right now are drawn to any company that has anything to do with electric vehicles. To be sure, Volta is expanding its charging network aggressively, and that's essentially what investors are betting on. However, the company is falling short of its own guidance.

Volta added 168 charging stalls in the third quarter and had a total of 2,137 stalls as of Sept. 30. By the end of the year, it says it expects to have between 2,300 and 2,500 stalls installed, with another 1,300 or more under construction. Back in June, though, Volta projected it would end the year with a total of 3,142 stalls.

The market isn't paying much attention to that shortfall, though. Instead, it appears to be focusing more on Volta's projected full-year revenue range of $32 million to $36 million. That guidance implies that the company will generate at least $11.8 million in revenue in the fourth quarter, which is significantly more than it brought in during Q3. So investors are purely betting on this EV stock's revenue growth, wherever it might come from.