The semiconductor company, which specializes in silicon carbide materials and devices, had been on an incredible run since late October after posting better-than-expected earnings results. However, the air was let out of the balloon on Wednesday after the company held its annual analyst day. Apparently, the company's longer-term guidance failed to meet stepped-up expectations. 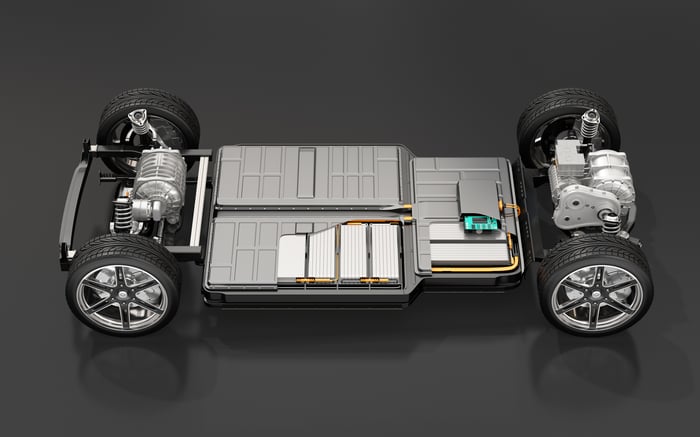 While recent financial results have been better-than-expected, Wolfspeed is still in the middle of a business transformation and still generating losses. Obviously, that's OK for a growth company, but eventually, investors expect to see profits and free cash flow.

Towards the end of Wednesday's presentation, Chief Financial Officer Neill Reynolds gave a longer-term outlook for investors going out to 2026. While the presentation showed strong growth and long-term profit targets, the reality of what was possible may have thrown cold water on investors who were expecting more.

Reynolds' presentation did show strong revenue growth, projecting a 30% annualized rate through 2026, which would take Wolfspeed's revenue from $526 million in its recent fiscal year to over $2.1 billion by 2026. That growth will largely come from the automotive opportunity as silicon carbide is a key material in the electrification and automation of vehicles. However, automotive-design wins take a while to phase in -- as in...years.

Later in the presentation, Reynolds projected positive free cash flow by 2024 when Wolfspeed's production is fully ramped up and the company receives reimbursement of incentives from the state of New York. Yet even by 2026, free cash flow margins are projected to reach about 20%, which may have underwhelmed some expecting fatter profits.

Wolfspeed currently has a market cap of $14.5 billion, and the company's baseline projections of $2.1 billion with 20% cash flow margins would only yield about $420 million in profits in 2026. So, today's stock still trades around 34 times 2026 cash flows.

Of course, those 2026 projections were likely the low end of an expected range, and companies often sandbag their guidance in order to beat expectations along the way. Furthermore, Wolfspeed will still be growing at a solid rate at that time, according to management.

Still, those projections mean that Wolfspeed is not a cheap stock. After a recent run that had taken the stock up 40% since its late-October earnings report, it's no wonder investors are "selling the news" today.

Why Wolfspeed Stock Was Surging Today
395%