Opendoor already was the leader in the iBuying space.

Zillow(Z 4.82%) made headlines when it shuttered its homebuying business. Many investors thought Zillow's proprietary Zestimate would give it an advantage. However, management admitted during its third-quarter that "the unpredictability in forecasting home prices far exceeds what we anticipated." Zillow acknowledged defeat and shut down the business segment, forcing Zillow to reduce its headcount by 25% and take more than $500 million in writedown losses.

Opendoor (OPEN 16.25%) also competes in this space, but it is succeeding, unlike Zillow. Will Opendoor rule this market, or is it destined to suffer the same fate as Zillow? 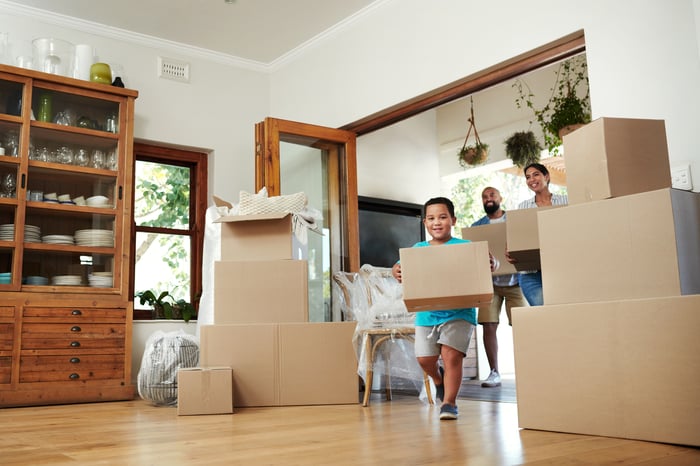 Growing, but struggling to break even

During the third quarter, Opendoor sold nearly 6,000 homes -- almost the same as the 7,000 Zillow needs to sell. Unlike the losses Zillow plans to take, Opendoor generated a gross profit of $202 million, resulting in a 9% gross margin. Opendoor also expanded the number of homes on its balance sheet, purchasing more than 15,000 houses in the quarter. The verdict is still out if Opendoor can turn homebuying into a profitable business. It reported a $57 million net loss during Q3. This should improve as the business scales.

For the fourth quarter, management is projecting around $3 billion in revenue, compared to $2.3 billion this quarter. However, it is guiding break-even adjusted EBITDA, while Q3's margin was 1.5%. Opendoor's primary headwind is a tight labor market affecting the whole country, as it must bring in contractors to perform necessary maintenance before it can resell homes for maximum profit.

Time will tell if Zillow was smart to exit when it did or if it walked away too early. Opendoor is seeing some challenges, but the company has laid out a path to overcome them.

Opendoor was the top dog before Zillow quit

Even before Zillow's exit, Opendoor was the superior business. In Zillow's second quarter, the last with a fully operational homebuying segment, it sold 2,086 homes versus Opendoor's 3,481. When it came to how much money each made after subtracting purchasing, renovation, holding, and selling costs, Opendoor's margin was 10.8%, compared to Zillow's 5.8%. Opendoor made nearly double the profit for each house sold. No wonder Zillow decided to exit.

Plenty of iBuying competitors still remain. Redfin (RDFN 12.80%) and Offerpad (OPAD 0.87%) are two companies vying to become the go-to platform for homebuyers and sellers. However, both companies still trail Opendoor.

Opendoor is the leader and will continue innovating to maintain its position. It's accomplished this by expanding to five new markets in Q3, bringing its total to 44. For comparison, Offerpad is only in 21 markets and added four in the last quarter. Even though Redfin's homebuying business is smaller than Offerpad's, it is still available in nearly as many markets: 20. Regardless, Opendoor is the frontrunner in the space.

Zillow's resignation from homebuying was all investors could talk about. But, they should have been discussing Opendoor's dominance. It remains to be seen if the online homebuying business is here to stay. About 1% of total metropolitan real estate sales are conducted by companies like Opendoor, Offerpad, and Redfin. Fortunately for these companies, iBuying is rapidly expanding and rose at a 233% rate in the first six months of 2021.

If online homebuying becomes the way of the future, Opendoor will be a huge win for investors. However, should the traditional real estate market economy continue to reign, Opendoor may not work out. Sitting at 40% below its all-time high, Opendoor makes sense to purchase for iBuying believers. The ride will be bumpy, but if anyone can make the business work, it will be Opendoor.

How Big Is Opendoor's Opportunity? 2 Charts You Need to See
410%