Sales of secondhand clothes are expected to soar in the coming years, and a number of companies are spying the opportunity, including The RealReal (REAL -7.96%), ThredUp (TDUP -4.80%), Poshmark (POSH), and Etsy (ETSY -0.47%)

In this episode of "Upgrade or Topgrade," recorded on Nov. 12, Millionacres Editor Deidre Woollard and Fool contributor Nick Rossolillo discuss the trends in the resale industry and why it's worth paying attention to. 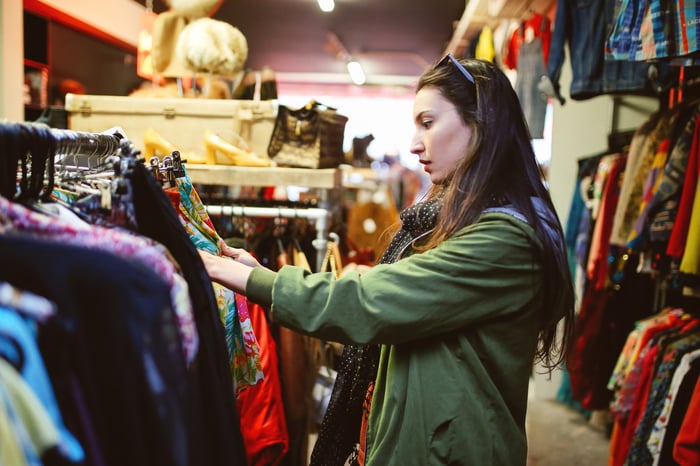 10 stocks we like better than TheRealReal
When our award-winning analyst team has a stock tip, it can pay to listen. After all, the newsletter they have run for over a decade, Motley Fool Stock Advisor, has tripled the market.*

They just revealed what they believe are the ten best stocks for investors to buy right now... and TheRealReal wasn't one of them! That's right -- they think these 10 stocks are even better buys.

Deidre Woollard: So let's talk about resale because I think most the companies we'll talk about today are relatively new to being publicly traded, and they're all capitalizing on this boom in resale, which is really interesting. It's a $28 billion business. It's one that Generation Z in particular is really excited about. The younger generation really prefers to thrift for variety of reasons, sustainability, individuality. It's growing by leaps and bounds, both offline and on. We've seen couple of interesting IPOs. We've got the acquisition of Depop by Etsy. It's interesting because there's a couple of different ways to do that. You think about the evolution of thrift stores. When I was growing up you had your Goodwill and things like that. Then eventually you had maybe some of the trendier stores. You've got things like Out of the Closet and things like that. Now you try to add online into the mix. First, probably started with eBay and people -- sort of the culture of vintage clothes popping up on there. But that was really more of collectors, people who are looking very specifically for certain designer things. But it started to be a group and now it's thrifting has become a lifestyle. That's what I find particularly interesting. I want to share with you guys a little slide. Let me see if I can share my screen, which is always a challenge. But I want to ask both of you: Are you thrifters in any way?

Nicholas Rossolillo: Personally, I'm not. My wife is. I guess I get some benefit from that in the industry. [laughs] Personally I'm not, but I have a lot of friends, especially, I'm like more millennial, but for some of the Gen Zers, it's a big deal. They're talking about it all the time.

Woollard: It's interesting because, is it more women centered? I tend to think yes, but then there's also this whole other shoe culture, which tends to be more male dominated. I think it's not necessarily. It used to be considered just women doing it. I think, now it's much more everyone. Let me share my screen because I want to go through some of the stats from this ThredUp report. Hold on, one second. There is this report that I did last year and they are talking about some of the different tailwinds here. You could see resale going through the roof and let me scroll down.

They're anticipating future sellers of 118 million and a massive supply of clothes that could be resold: 36 billion. That's just massive to me. When you look at that, the potential that you've got there is just incredible. Part of what ThredUp is really saying is that this is just something that's going to keep growing, really large total addressable market here. But also a real challenge in the business model itself and how you do it. I'm going to stop sharing because that's one of the things I think that we're going to be talking about today when we look at different companies, different business models.