Iron Mountain (NYSE:IRM) is a unique real estate investment trust (REIT) that basically has no direct peers. That can make it hard to analyze the company, but there are some financial truths that can't be ignored, and those metrics show the REIT and its dividend may be riskier than some investors realize.

Storage then, now, and in the future

Iron Mountain's core business is storing physical records. Mostly, that involves bankers boxes full of papers that it puts into safe locations so its customers can clear out space in their own buildings. It's a very sticky business since most companies don't want to touch the boxes they store again until they are so old that the contents can be legally destroyed. For example, the average box that the real estate investment trust gets sits in storage for 15 years, and the company has a 98% customer retention rate. 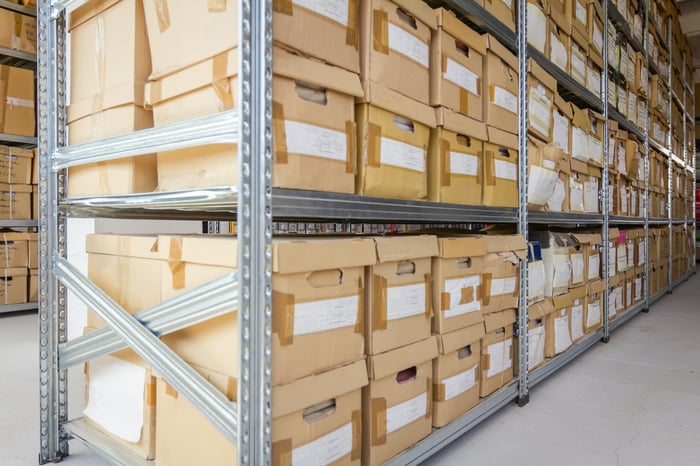 The problem is that the world is increasingly going digital, so paper just isn't as important as it was before. And that means that its core business, despite being sticky, is slowly dying.

Iron Mountain's management isn't sticking its head in the sand, though. It's doing something about the problem -- building data centers. That's basically the future of storage, which Iron Mountain hopes it can tap into with its massive Rolodex of big-name customers. Around 95% of the Fortune 1000 use its services today.

On the surface, it sounds like Iron Mountain is heading down a great path, using its "cash cow" core operations to fund its expansion into a new area. Only there's one big problem: A REIT has to pay out huge amounts of cash to investors (at least 90% of its taxable income) in the form of dividends. There's really not all that much left after that to pay for a costly transition. That increases the company's risk across the board. And, even though it could trim the dividend to the bare minimum required for a REIT, management is loath to cut the payment because doing so would turn off investors.

The dividend and more

So the company is in the middle of an important overhaul that will ultimately determine its long-term future. Because it's a REIT and wants to avoid a dividend cut, it has to look to capital markets to help fund that shift. The means debt and stock sales are key issues for investors to monitor. With a dividend yield of 5.3%, stock sales are a little expensive; the average REIT, using Vanguard Real Estate Index ETF as a proxy, has a yield of just 2.2%. And secondary offerings aren't exactly the ideal way for it to raise cash, given that it has to pay dividends on each new share it sells.

Iron Mountain's debt, meanwhile, is fairly high. Though management says that its balance sheet is well-positioned, its debt-to-equity ratio of nearly 9.4 is woefully out of sync with the largest data center REITs, which have ratios closer to 1. Building data centers is a costly endeavor, but adding more leverage to the balance sheet isn't exactly an exciting prospect. 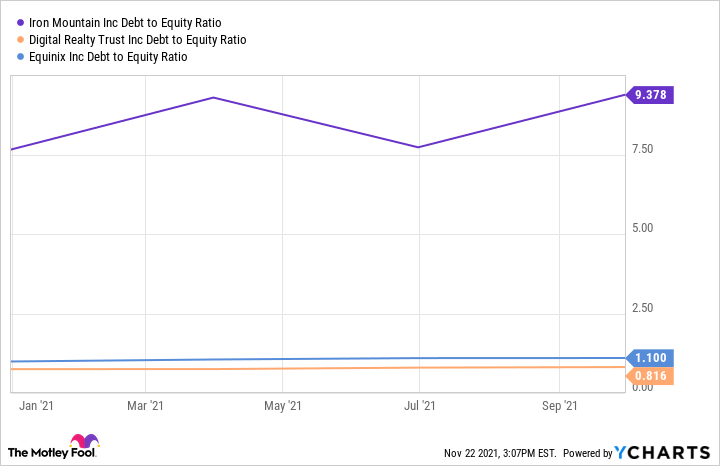 And yet Iron Mountain's payout ratio in the third quarter was a fairly reasonable 70% or so of adjusted funds from operations (FFO). The adjusted FFO metric factors out some one-time items. Leave those in, and FFO shrinks enough to boost the payout ratio to around 85% -- still not terrible, but getting closer to worrisome territory.

Still, on its own, the payout ratio isn't all that troublesome. It's when you add in Iron Mountain's leverage and its expensive (though necessary) business overhaul that the risk starts to become more apparent. Simply put, if something should go wrong during the REIT's transition into a more digital company, cutting its dividend would be a very convenient way to shore up its finances. That doesn't mean there will be a cut, but there is likely more risk here than meets the eye.

So far so good

Given the REIT's recent past, this analysis might sound like Chicken Little's warning that the sky is falling. But leverage materially limits a company's flexibility, and Iron Mountain has a lot of leverage -- notably more than the REITs it is increasingly trying to emulate. If everything goes well, the company and its dividend will probably be just fine. If something goes wrong, however, the impact could be swift and painful. That's not something that risk-averse income investors should ignore, even though Iron Mountain's yield is fairly generous today.

If you do decide to buy, make sure you continue to pay close attention to the digital makeover, the dividend, and the balance sheet. All three are potential trouble spots.