Please ensure Javascript is enabled for purposes of website accessibility
Log In Help Join The Motley Fool
Free Article Join Over 1 Million Premium Members And Get More In-Depth Stock Guidance and Research
By Dan Caplinger - May 5, 2018 at 10:50AM

Find out how best to put money into the U.S.'s southern neighbor.

Many investors make the mistake of concentrating solely on U.S. stocks. But opportunities abound in overseas markets, and you don't even have to go that far from home to find potentially lucrative investments. Mexico has substantial mineral wealth, and the emerging market economy has built up a growing base of middle-class consumers with demand for goods and services of all kinds.

Investing in Mexico can be challenging, however, because many companies in the U.S.'s southern neighbor don't trade on U.S. exchanges. Exchange-traded funds can provide easier access to Mexican stocks. In honor of the Mexican celebration of Cinco de Mayo, here are three funds among the most popular for investors who want to profit from Mexico's future.

The first decision investors have to make in using funds that trade on U.S. exchanges to invest in Mexican stocks is whether you want to go with regular ETFs or closed-end funds. Both share many things in common, including convenient trading through a regular brokerage account at any time that the market is open. However, there are also some key differences.

The biggest difference between closed-ended funds and regular ETFs is that while ETFs can issue new shares at will, closed-ended funds have fixed numbers of shares available. That can lead to closed-end shares often trading at either a premium or discount to the value of the fund's net assets. ETFs typically do a much better job of tracking the actual value of the investment assets they own.

In the case of Mexico, closed-ends are currently trading at discounts to their net asset values, with the two funds above having discounts of about 13%. That can be a benefit if you expect Mexico to become a more popular destination for investors to put their money, because that would likely close the discount and add to any increase in Mexican stock prices. But discounts can persist for years, so you shouldn't count on the potential extra return from their disappearing. 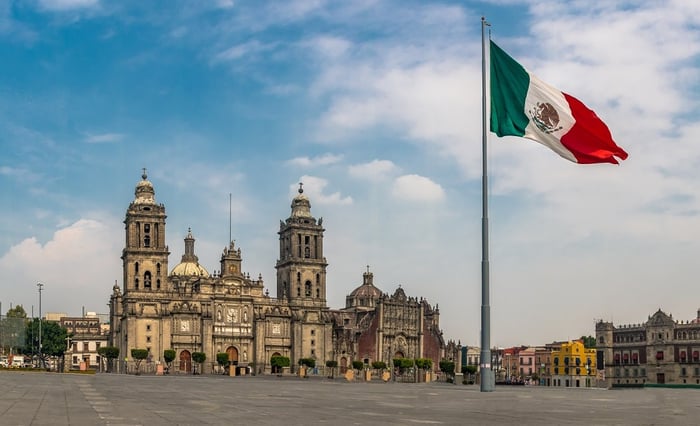 Another key difference among these funds is the way they invest. The iShares fund is a passive ETF, tracking an index of 60 Mexican stocks that reflects their relative importance in the nation's economy. You'll find broad-based exposure to consumer staples, telecom, financial, materials, and industrials stocks, with smaller allocations to areas like real estate and consumer discretionary stocks. The expense ratio of nearly half a percent isn't cheap for an ETF, but it's still less than what you'd pay for active management. The ETF has a distribution yield of nearly 2%, providing some valuable income to investors.

Go beyond the U.S.

If you're interested in foreign investing, Mexico could be an intriguing choice for adding to your overall portfolio. The iShares ETF has the lowest costs, but if you think Mexico will come into favor, betting on a narrowing discount could add to returns for the two closed-end funds. Either way, these exchange-traded Mexico investments have seen strong periods in the past and are likely to rebound from their recent slumps in the long run.