Please ensure Javascript is enabled for purposes of website accessibility
Log In Help Join The Motley Fool
Free Article Join Over 1 Million Premium Members And Get More In-Depth Stock Guidance and Research
By Catherine Brock – Sep 20, 2020 at 10:56AM

Did you know there are roughly 7,000 exchange-traded funds (ETFs) available globally? If you're looking to add an ETF to your retirement account, you have an overwhelming range of choices -- from funds that track the S&P 500 to funds that are backed by actual gold reserves to oil funds and so much more.

Homing in on the right fund isn't terribly complicated when you're clear on the exact type of exposure you want. But it's a far murkier process if you're just starting to invest for retirement and you're not sure what you need.

In that case, you'll benefit from a low-cost stock fund that's diversified and has a history of producing acceptable returns. Vanguard Total World Stock ETF (VT 2.73%) meets those qualifications. Here's a look at how and why this ETF might fit into your retirement investing program. 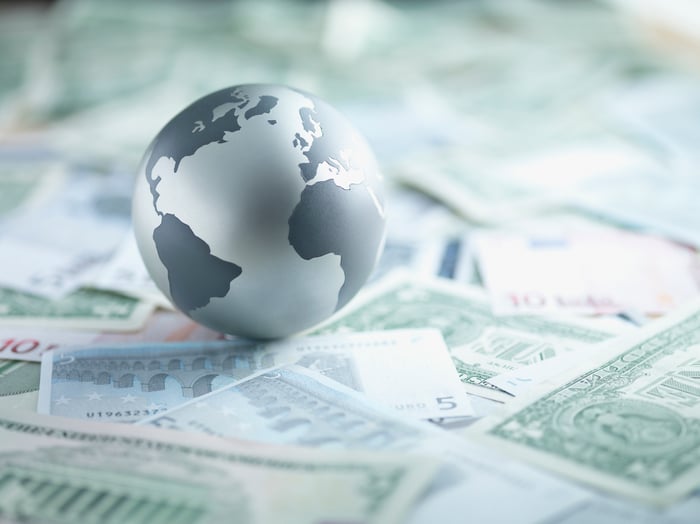 The Vanguard Total World Stock ETF holds more than 8,700 companies in its portfolio, with exposure to the North America, Europe, Pacific, Middle East, and emerging markets regions. If you want equity coverage around the world, this is probably the only fund you need. U.S. stocks make up about 60% of the portfolio, and the top five holdings are Apple, Microsoft, Amazon, Alphabet, and Facebook. But the fund has international names you'll recognize, too, like Unilever, Toyota, and Volvo. European companies account for almost 17% of the portfolio, while operations in the Pacific and emerging markets comprise 11.9% and 10.4% of the fund's portfolio, respectively.

One of the fund's most appealing features is its ultra-low expense ratio of 0.08%. The closest competitor in the global stock ETF space is iShares MSCI ACWI ETF (ACWI 2.79%) -- but that fund's expense ratio is four times larger at 0.32%. The difference between 0.08% and 0.32% may seem minor, but it adds up when you stay invested for several decades. Specifically, on a $5,000 annual investment, if all else is equal, the .32% expense ratio will reduce your returns by about $22,000 over 30 years compared to the 0.08% expense ratio.

Note that the caveat of all else being equal is a big one that often doesn't apply in real life. As with many competing funds, these two do have other differences that influence returns in other ways. When evaluating a fund relative to its peers, look at the expense ratio along with other factors like portfolio composition, historic returns, and investing approach.

Speaking of returns, the Vanguard Total World Stock ETF has returned 10% annually on average over the last 10 years. As you can see in the chart below, the global fund has lagged behind the U.S.-based S&P 500. 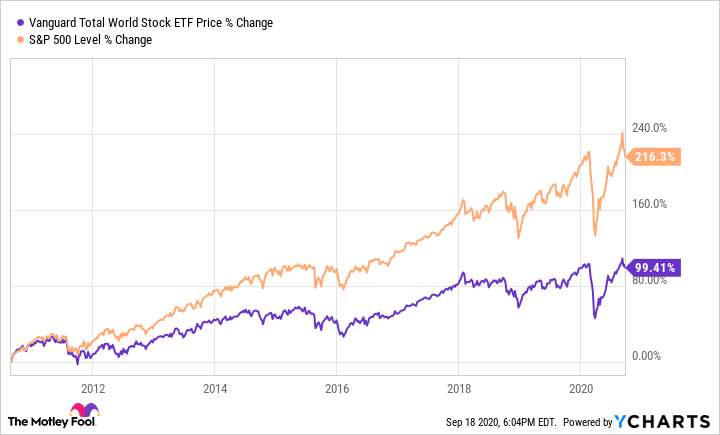 You might be wondering at this point why you shouldn't invest in an S&P 500 index ETF instead, since the returns have been higher. Admittedly, that's not a bad option for your retirement account. But it does mean you'll feel the full force of market fluctuations in the U.S. -- whether good or bad. Between 2012 and 2019, full U.S. exposure was a good thing for investors, thanks to one of the most impressive bull runs in U.S. stock market history.

Holding all of your retirement wealth in U.S. securities is an option when you believe the U.S. will continue to outperform the world. Otherwise, you might want some international exposure to smooth out any volatility that's specific to the U.S. And you'll have a shot at benefiting from growth in other parts of the world. You can get that exposure in other ways, but the Vanguard Total World Stock ETF offers a one-stop shop of sorts.

If you decide this Vanguard fund has a role to play in your retirement account, be sure to couple it with a fixed-income fund to moderate the risk and add even more diversification.

3 Vanguard ETFs That Could Help You Retire a Millionaire

5 ETFs Perfect to Grow Your IRA

3 ETFs Perfect for Your IRA