Shares of Pandora Media hit a 52-week low recently. Let's look at how it got here and whether dark clouds are ahead.

How it got here
It's been less than a year since Pandora's IPO last summer, but the company's prospects really never looked all that bright in the first place.

Pandora has an absurdly popular music discovery service, and for good reason. Unfortunately, the good news ends there since it always had a hard time monetizing all those users. I've already told you why I won't buy Pandora, why it's in trouble, and even that I think it's a downright sell.

Advertising remains Pandora's largest revenue source by far -- 87% of sales last year -- so it's been trying to cram more ads into users' content streams, which users don't appreciate all too much. A few weeks ago, Clear Channel CEO Bob Pittman said the negative listener reaction to Pandora's ads is leading it to rethink its strategy for its own competing iHeartRadio service.

Just last Thursday, Barclays analyst Anthony DiClemente started shares with an underweight rating and an $8 price target, saying he doesn't expect the company to be profitable until fiscal 2016 because of its hefty content acquisition costs.

How it stacks up
Let's see how Pandora stacks up against its peers. Unfortunately, most of its rivals are either privately held or part of larger companies, which makes companywide comparisons less appropriate. Sirius XM is the closest competitor. 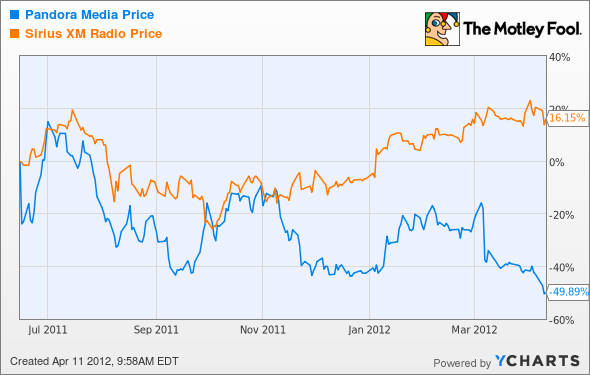 Let's add some other fundamental metrics into the mix for more insight.

Those are some gloomy figures for Pandora. For its lofty valuation, investors are treated to an awful lot of red ink compared to Sirius' established satellite radio business.

What's next
I think Pandora is set to head even lower. Even as its own business model is clearly broken, it faces increasing competition. CBS bought rival Last.fm five years ago; Google, Apple, and Amazon.com are all aggressively pushing their own respective cloud music streaming offerings. Spotify just jumped headfirst into the U.S. market.

Pandora investors should brace themselves for more pain ahead.

Interested in more info on Pandora Media? Add it to your watchlist by clicking here.