It's Jan. 9, 2007. Legendary Apple CEO Steve Jobs has just presented the first iPhone, sparking a smartphone market that still unfolds some five years later. The established leaders in high-end handset wizardry at the time are Research In Motion and Nokia , though Americans might be forgiven for recognizing the BlackBerry fever faster than the more global Symbian phenomenon.

It's all good. A rising tide lifts all boats, but Apple's more than others. The whole sector is on the rise.

That is, until the next holiday season reveals Apple as the obvious winner in the early smartphone wars. Nokia and RIM failed to adjust to the new reality, and this is what happened: 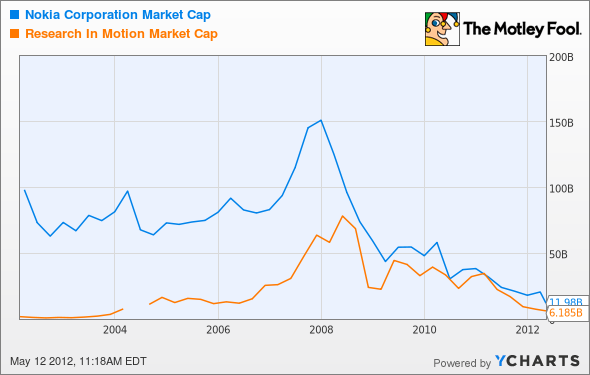 This was unthinkable five years ago. The CrackBerry craze seemed unstoppable. Nokia owned a $150 billion market cap on a parabolic rise. Apple knew nothing about mobile phones. How could an iPod Touch with some phone circuits possibly challenge the entrenched top dogs?

But that's what happened. Today, RIM and Nokia are on life support while Apple is the world's largest company by market cap. There's no stopping the Cupertino cash machine.

Stop me if you've heard that one before
History is apt to repeat itself, my friends. Apple and Android are killing the Nokia and BlackBerry platforms, which already destroyed Palm, pagers, and PDAs. There's always another revolution waiting just around the corner. How do you know Apple's head won't be next on the chopping block?

I know, you've heard this song before: The sky is falling, the wolves are coming for real this time, Apple is too big to fail. Go home, you eternal Apple bear, Chicken Little, boy who cried wolf.

Laugh it off if you want, but don't act too surprised when Cupertino's collapse comes. It's been lonely here in the land of Apple skeptics, but that's changing as we speak.

Listen to this broken record
You might remember High-Tech Strategist editor Fred Hickey as the guy who called the demise of RIM before it happened. Here's a clip from fellow fool Rick Munarriz's take on that call:

"RIM has a market valuation of $75 billion, but just 1% of the cell phone market. Nokia has a market cap of $100 billion, and a 40% market share. What kind of upside is there at this valuation?" Sure, he didn't point out how RIM milks a whole lot more out of every BlackBerry user, but it's an interesting point.

Chilling, isn't it? Collecting the lion's share of smartphone profits on a minuscule market share didn't work out so well for RIM in the end. Why would Apple be any different?

Indeed, Hickey is back with harsh analysis of the new profit leader. The latest installment of his newsletter says that the "parabolic fever" for Apple stock has broken, perhaps forever. "If so, Apple's stock will continue to break down, frustrating the Appleholics who will buy on every dip, citing the 'low' valuations," Hickey says. "They will buy it all the way down."

Hickey's motivations for shorting Apple ring all too true: "Only in hindsight (years later) will they know that Apple's $600 billion valuation could not be sustained, that Apple is a consumer product company subject to the whims of consumers. That Apple sells commodity type products: phones, PCs and PC-type products (tablets) where margins could not possibly be sustained at current levels."

That's the ultimate insult for many Apple fans. Have you ever thought of Apple as a simple commodity player? But it's true. If every iPhone suddenly disappeared from the market today, you could pick up an Android or a Windows phone instead. The Macbook Air is a fine machine, but Intel presents the Ultrabook form factor as a solid alternative. The chip champ is pouring $300 million into marketing the concept. iPads own the tablet market, but is it because they're so much better than the Android competition, or is it simply a result of brilliant marketing with a first-mover advantage?

Delete the iPhone, iPad, and Mac from today's markets, and they would surely be missed -- but they would be easily replaced. "Commodity" may be a strong word to use here, but that's the way the cookie is crumbling now.

Apple runs a tightly integrated business model, where the company controls every piece of the puzzle with an iron grip and everything links back to the iTunes hub. It's great while it works, but it's destined to fail: "The transition from proprietary architecture to open, modular architecture just happens over and over again," Christensen recently said on the Critical Path podcast. And Apple is in danger of becoming another Sony , protecting successful products at the expense of missing out on the next revolution.

As a reminder, Sony's earnings peaked at $1.8 billion in 1998 before the wheels fell off. In the just-reported 2012 fiscal year, Sony lost $4.8 billion. Apple's stakes are higher by an order of magnitude, but it's clear that Cupertino doesn't want to copy Sony's failures.

The Loomis Sayles Growth Fund isn't buying Apple shares. "In the end, we believe that its margins, market share and the business model are not sustainable," fund manager Aziz Hamzaogullari told CBS News. Receding subsidies play a large part in his gloomy conclusion.

The Pax World Growth Fund owns Apple but isn't a buyer right now. Manager Tony Trzcina explains why: "Its revenue projections assume that every new product introduction will be a hit." That's a big worry given how often Apple replaces each of its major product lines with a new model -- what happens if the iPhone 5 is a dud? Or the iPad 4? Apple can hardly afford to replace a winning model with a stinker, but it's bound to happen someday.

Apple is fighting an epic battle against history while trying to avoid some very scary pitfalls here. CEO Tim Cook could very well solve every problem discussed here, but he stares down some long odds. Chances are, several of these factors will combine to bring Cupertino back to earth.

You don't have to expose yourself to all of Apple's risk factors to invest in the trillion-dollar mobile-computing revolution. The Fool's finest analysts lay out the case for an alternative smartphone and tablet play in this special report. Read it to understand what really drives this market, but grab your copy quick -- the report won't be free forever.

Is Apple the Next Sony or the Next RIM? @themotleyfool #stocks $AAPL $NOK $INTC $SONY $BB Next Article
Current