Shares of AVG Technologies hit a 52-week low on Tuesday. Let's take a look at how it got there and see if cloudy skies are still in the forecast.

How it got here
From where I'm sitting, antivirus software provider AVG Technologies is suffering less from its own problems and more from the underwhelming performance across its industry.

In late April, Symantec , maker of the popular Norton Antivirus software, warned that it was seeing fewer deals for server management and licenses from its corporate customers, causing it to adjust its fourth-quarter earnings projections lower. The flurry of analyst downgrades that ensued crushed the stock and walloped the sector as a whole. McAfee, which is owned by Intel , hid its 27.5% decline in revenue last year behind Intel's other business segments. With security software performing so poorly, it's not surprising to see AVG getting thrown out with the bathwater.

However, things aren't as simple as, "Symantec and McAfee are struggling, so AVG must be as well." Unlike these two companies which have existing deals with PC-makers set up to get their software onto an operating system prior to the point-of-sale, AVG relies on a mixture of advertisements and its free antivirus software to drive users into upgrading. That means AVG's customer-cost basis is much lower than Symantec and McAfee, and it gives AVG considerably more room to grow. AVG also has advertising deals with leading search engines Google and Yahoo! whereby it gets paid to drive traffic to their sites.

How it stacks up
Let's see how AVG Technologies compares to its peers. 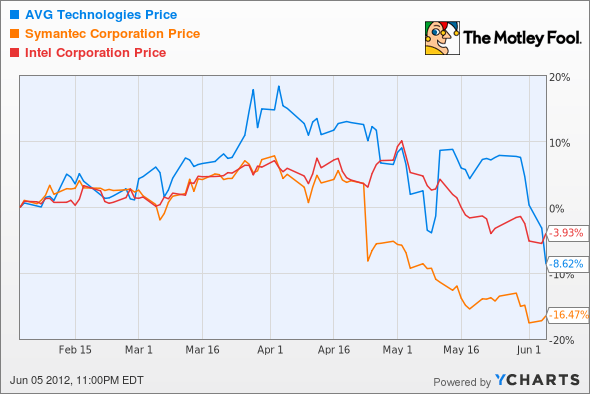 In the short time AVG has been a publicly traded company, none of the PC-security software companies have performed particularly well.

Each company offers its own strengths and weaknesses based on the metrics above.

For AVG, accumulated losses actually give it negative equity on its balance sheet. On the other hand, AVG bumped its full-year forecast higher when it reported earnings in mid-May, unlike its counterparts, which could make it the most compelling value of this bunch.

Symantec holds the distinct advantage over McAfee of actually growing its market share in consumer and enterprise security software in 2011 by 17%. Then again, that wasn't enough to save it from lowering its earnings guidance recently.

Intel's McAfee may be the only one of the three failing to grow its business in 2011, but Intel is also the only company here offering shareholders a dividend. However, that will be a moot point if McAfee and Secure Computing, two security companies Intel purchased to integrate the consumer and enterprise segments of their software together, can't figure out a way to improve their results.

What's next
Now for the $64,000 question: What's next for AVG Technologies? The answer will depend on whether it can turn some of its 91 million free users into paying users, and if it can build on its partnerships with Google and Yahoo! while also pursuing other partnership possibilities.

Our very own CAPS community gives the company a four-star rating (out of five), with 11 of 13 members expecting it to outperform. Although very few members have made a CAPScall on AVG, I was one of the first members anoint it with an outperform call. Currently I am down four points on that call, but my resolve on AVG remains unchanged.

AVG's extremely low customer acquisition costs coupled with its ability to form partnerships make it an extremely attractive buy in the online security software space. Based on Symantec's Internet threat report that it thwarted 81% more attacks in 2011, it's clear that plenty of opportunities are available to AVG in the consumer and enterprise arena. I'll be looking for AVG to take market share from the struggling McAfee and move decisively higher off its lows.

Just as I'm scouring around for the next great tech stock, our team of analysts at Stock Advisor has identified three stocks to own for the next Industrial Revolution. Find out their names for free by clicking here to get your copy of our latest special report.

Craving more input on AVG Technologies? Start by adding it to your free and personalized watchlist. It's a free service from The Motley Fool to keep you up to date on the stocks you care about most.