Microsoft's (NASDAQ:MSFT) big jump into first-party consumer hardware didn't go over too well with its OEM friends, contrary to what they might maintain publicly. Some partners -- like Acer -- aren't even trying to veil their disdain for their partner-turned-competitor. The most obvious follow-up question in the wake of the Surface tablet that's on its way to market was whether or not Microsoft would similarly follow up with a first-party smartphone.

Why ask why not?

It's been a hot topic of debate, and naturally lacking any meaningful input from Microsoft on the matter. In June, Windows Phone marketing exec Greg Sullivan said Microsoft had no such plans, but that could easily be a veiled statement to the media.

Some analysts have said that pursuing its own smartphone would be a "last resort strategy," which would risk alienating current OEM partners. The hole in that rationale is that the exact same thing could have been said in tablets, and Microsoft is clearly comfortable with that risk, so why wouldn't it do the same thing in smartphones?

If Microsoft truly wants to pursue an integrated device strategy like Apple (NASDAQ:AAPL) -- and by the looks of Surface, it does -- then building a Surface phone is just a hop, skip, and a jump away from a Surface tablet, especially when you remember that Windows Phone 8 is based on the same core technologies as Windows 8.

Double the fun
The China Times is reporting that Microsoft actually began secretly working on its own branded Windows Phone 8 device four months ago, which is set to debut in the first half of next year. That way the company can have control over material selection, industrial design, service, and the integration of hardware and software, without leaving those important variables up to third-party OEMs.

Now BGR is also tossing its hat into the rumor ring with an exclusive report that echoes some of the sentiments from the Far East. Its sources are similarly saying that Microsoft is in the "late stages" of putting together a smartphone that will launch within a matter of months, partially coinciding with the aforementioned first-half-of-2013 time frame. The report doesn't think Microsoft will have one ready for the introduction the first batch of Windows Phone 8 devices like Nokia's (NYSE:NOK) Lumia 920, HTC's 8X, or Samsung's Ativ S.

During the dawn of the PC, the value chain moved toward a fragmented model, where Microsoft provided the OS to dozens of commoditized hardware players that were left to compete on cost and pricing. That led to lower quality hardware as OEMs worked to relentlessly undercut each other. It was just the way things were.

With Apple's success in recent years using a fully integrated approach to build higher-quality hardware, consumers have taken notice. Google (NASDAQ:GOOGL) is on this same track after acquiring Motorola Mobility earlier this year, and has already released its own Nexus 7 tablet. Don't be shocked if Big G soon unveils a Motorola device with newfound levels of Android integration. Amazon.com (NASDAQ:AMZN) released its own Kindle Fire tablets, and Microsoft is now releasing its Surface tablet.

Asymco's Horace Dediu outlines this evolution toward integration aptly, including an illustration from Clay Christensen that shows the value chain from the 1960s to 2000. 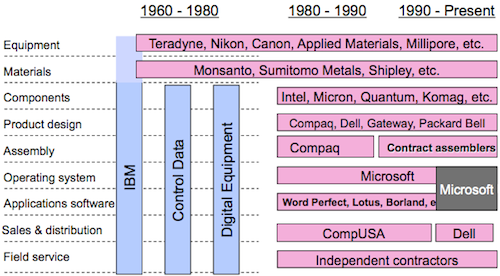 With Surface, Microsoft is taking control of materials and product design. Its Microsoft retail stores are clear moves into sales, distribution, and service. Apple already does these things, and is even engineering some of its own components like its A-series of mobile processors and custom batteries.