In an effort to boost its Chrome OS, search giant Google (NASDAQ:GOOGL) has unveiled a new $249 Chromebook laptop. The computer is built by hardware partner Samsung and resembles an Apple (NASDAQ: AAPL) MacBook Air. 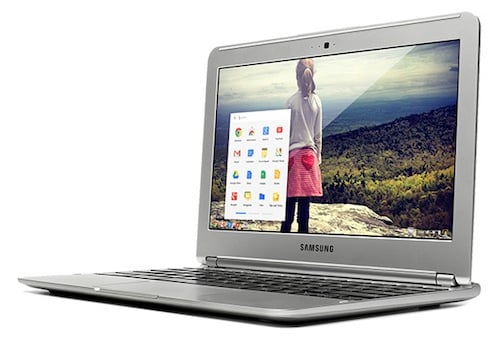 It features an 11.6-inch display and weighs approximately 2.5 pounds. Google also says it can get up to 6.5 hours of battery life and boots up in less than 10 seconds. The laptop is a lightweight device that Google is pitching as a secondary computer "for everyone."

The Chromebook comes with 16 GB of flash memory for storage, although Google is including 100 GB of free cloud storage through its Google Drive service. In order to achieve the low price point, the device uses an ARM Holdings- (NASDAQ: ARMH) based processor similar to ones found in mobile devices like smartphones and tablets. In this case, Samsung next-generation Exynos 5 chip powers the device.