While most pharmas are up this year, many even handily beating the S&P 500, Bristol-Myers Squibb (NYSE:BMY) has struggled. 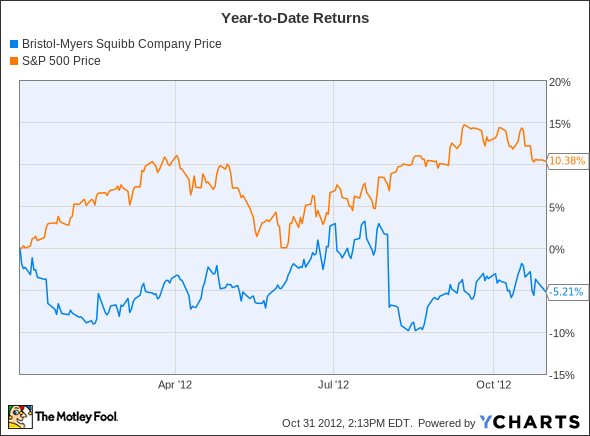 Blame it on Plavix
Not directly mind you. Everyone knew Plavix was going off patent this year, so it wasn't a huge shock when sales of the drug dropped 96% in the third quarter.

But the loss of a $7 billion drug and Bristol's decision to spin off or sell its non-pharma assets like Mead Johnson Nutrition (NYSE:MJN) have caused the pharma to act a lot more like a biotech that's dependent on its pipeline for success than the typical pharma that can brush off pipeline failures.

In July, brivanib became officially dead as a treatment for liver cancer. Bristol was simply trying to show that it was as good as Bayer and Onyx Pharmaceuticals' (NASDAQ: ONXX) Nexavar, but it couldn't even accomplish that.

Even worse news came in August, where you can see a sharp drop in the stock price on the chart above. Bristol announced that it was ending development of its hepatitis C drug BMS-986094. The drug caused heart toxicity and other issues.

Hepatitis C is a major market. Vertex Pharmaceuticals' (NASDAQ:VRTX) Incivek was an instant blockbuster in its first year on the market, and the next-generation drugs are expected to be even better. Bristol has a few other hepatitis C drugs in its pipeline, including a late-stage drug daclatasvir, but to get substantial cure rates, the drugs will have to be used as a cocktail. Losing its partner drug for daclatasvir was devastating, especially since Gilead Sciences (NASDAQ:GILD) doesn't seem willing to join forces.

The world's largest biotech pipeline
Despite the failures, Bristol still has a solid pipeline, with eight drugs in late-stage development and a laundry list of drugs earlier in development.

One quick save should come from Eliquis, which is approved in Europe but was rejected by the Food and Drug Administration in June because the agency wanted to see more data. Bristol and its partner, Pfizer (NYSE:PFE), have already resubmitted, so it couldn't have been that big of an issue. The drug looks better than Boehringer's Pradaxa and Johnson & Johnson's (NYSE:JNJ) Xarelto at treating atrial fibrillation.

Investors should also keep an eye on Bristol's oncology pipeline. Brivanib could still work in other cancers, even though it didn't help liver cancer patients; oncology drugs are funny that way. Bristol also has a pair of monoclonal antibody drugs, elotuzumab and necitumumab, in late-stage trials and 11 oncology drugs in earlier-stage testing.

Bad news buy?
You could do a lot worse than buying Bristol at these levels. With the reliance on the pipeline, you'll have to take more risk than with a typical pharma, but the upside appears to be greater than its peers because hits from its pipeline will count more given the lower post-Plavix revenue.

And unlike a typical biotech, Bristol offers an annualized dividend of $1.36, which helps mitigate the risk because you'll get paid while waiting for the pipeline to develop. At current knocked-down prices, the yield is a solid 4%. The dividend looks fairly stable and has actually increased each of the last three years.