The economy added 171,000 jobs last month, and the previous two months were revised higher by a combined 84,000 jobs. This was better than nearly any analyst expected, supporting the view that the economy is in a slow recovery. 2012 is shaping up to be the best year for jobs growth since 2005 and the fourth-best since 2000.

The bad news is that the hole left by the financial crisis makes decent employment numbers woefully inadequate. Assuming jobs growth continues at the current pace, it will be almost 2016 before we see a 6% unemployment rate. If we get lucky and jobs growth jumps to 200,000 a month, unemployment won't drop below 6% until 2015. It is just ugly: Only five years after the recession began, there are few reasonable scenarios in which we will see a normal, healthy unemployment rate within the next two years. And the longer people remain out of work, the harder it is for them to re-enter the labor market, making this mess all the more dire.

No single employment report is all that useful, as the margin of error (plus or minus 100,000) creates noisy swings, and revisions  can change the direction of reports entirely. What matters are broad trends. And one trend that has developed in recent years is becoming increasingly persuasive: Jobs growth is great early and late in the year but poor in the middle: 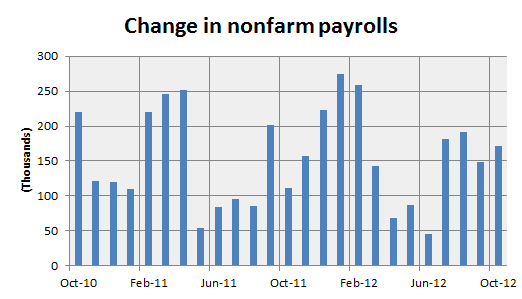 The  majority of jobs growth since 2010 has come either between January and March or between September and December.

Three years of data isn't enough to be sure this isn't just a fluke, but it's likely that the seasonal adjustments the Bureau of Labor Statistics uses were thrown out of whack as hiring patterns shifted after the financial crisis. Over the course of a year, these adjustments should make no difference -- jobs numbers that are over-reported one month will be under-reported in other months. But it highlights how important it is to take monthly reports with a grain of salt, paying more attention to long averages than monthly swings. To paraphrase Derek Thompson of the Atlantic, you can sum up all 36 employment reports of the last three years in one line: Things got better, slowly. Everything else was noise.

A few other trends stick out: