Prominent Chinese stocks on American markets are currently in a slump, but apparently YY (NASDAQ:YY) didn't get the memo. The social-networking operator's shares rose a nice 8% in their IPO last week, providing a jolt of bullishness for an asset class that's by and large gone rather cold lately. YY has some interesting fundamentals, but is that lift justified, and more crucially, can it be sustained?

Sing for your supper
For those who don't habitually cruise Chinese social networks, YY is a site that allows gamers and performers of various stripes to connect with each other or an audience via its numerous platforms. For players, it offers the usual in-game purchases of items useful in the selected contest. It has a cool offering for performers, in that it allows their viewers/listeners to buy virtual roses to toss their way. The recipients can then exchange those online flowers for real-world cash; some users make tens of thousands of dollars every month by doing so.

It's a fresh and unique twist YY has grafted onto its more typical advertising and in-game merch business model, although it's as yet unproven for the long term. True to Internet stock tradition, YY consistently posted losses over the years, some of which were pretty steep. In 2009, it landed around $53 million in the red. A year later that tally was approximately $326 million, while in 2011 the bleeding was somewhat stanched at $49 million. The company has only just started to turn a profit; in the first nine months of this year, it netted $9 million.

Also hewing to e-tradition, YY's revenues have been growing sharply, from roughly $2 million in 2009 to $26 in 2011, and $88 million in this year's January-September period.

Comparison shopping
Which is one possible reason the IPO was a success; YY might be looking better on a comparative basis than its big compatriots. What helps is that its business model has no real direct competitor. At the moment, the market doesn't feel the same way about search giant Baidu (NASDAQ:BIDU) now that Qihoo 360 (NYSE:QIHU.DL) and its "new" search function is seen as a competitive threat. That's more perception than reality, as my fellow Fool Andrew Tonner opined in this recent video. Perception matters, though, and largely as a result, Baidu stock has fallen more than 15% in the past month.

Compounding this is the relative weakness of the overall Chinese economy. Now, a 7.4% year-over-year rise in quarterly GDP -- as the nation posted in Q3 -- would be the envy of most countries, but China isn't most countries. Not long ago, that number was regularly in the double digits, so investors are starting to get nervous about future growth prospects.

That's a big reason one-time investor favorites such as Renren (NYSE:RENN) -- a fellow domestic social-media purveyor, although not really directly comparable with YY -- have shed market value in spite of positive developments (like, in Renren's case, beats on analyst expectations for revenue and EPS in its most recent quarter).

Even some that have benefited from both solid results and good news from outside haven't escaped this fate. Witness SINA (NASDAQ:SINA), which earlier this month posted a quarterly EPS number well above what the market anticipated, and on top of that became the target of a hot rumor that e-commerce giant Alibaba Group would buy a big stake in the company's Weibo microblogging platform. Despite a brief lift from the scuttlebutt, the stock has still dropped at a Baidu-like rate over the past month. 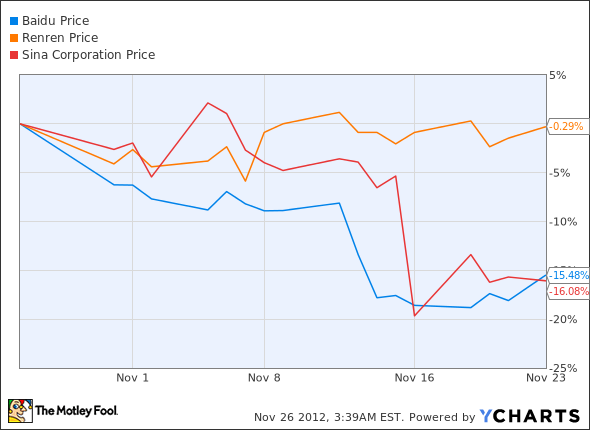 Is this performance worth any roses?
Going strictly by the numbers, YY looks encouraging on a revenue and user basis (it now has more than 400 million accounts and 70.5 million monthly active users). That historically underwater bottom line is cause for concern, though, and so it's questionable how long all that IPO cash ($82 million, to be exact) will last if the ink turns red again. YY's a hit, sure, but as we've seen in many cases with American sites, popularity doesn't necessarily mean profits.

An 8% stock price rise is good but not spectacular, and it should be kept in mind that this was at least partially because the IPO was placed at the floor ($10.50 a share) of its anticipated price range.

So at the moment, this stock looks like a play only for those who believe that special twist on the business model can work, not to mention the hardy souls who haven't been spooked by its country's GDP numbers. Everyone else might be better served waiting for the macro numbers to improve (and, thus, overall investor sentiment to turn more bullish), or for the company to notch a few more profitable quarters.