Apple (NASDAQ:AAPL) and Broadcom (NASDAQ: BRCM) are already rather cozy, but that doesn't mean the pair can't get even cozier.

Broadcom is already the primary supplier of Wi-Fi combo chips for everything from Macs to iDevices. The newest iPhone 5 carries Broadcom's BCM4334 chip, which includes a number of benefits. The chip moved from a 65-nanometer manufacturing process to a 40-nanometer node, a transition that improves power efficiency.

It also added dual-band Wi-Fi to the iPhone for the first time, opening up the 5 GHz band for iPhone use in an even larger frequency channel than the crowded 2.4 GHz channel used in the previous iPhone 4S. What it expectedly didn't have was support for 802.11ac, the next-generation Wi-Fi following the current 802.11n that's currently used.

This latest 802.11ac standard is commonly referred to as "5G Wi-Fi," which has no relation to the 3G and 4G cellular standards the wireless industry focuses on. It also hypothetically promises gigabit data speeds, which is substantially faster than 4G Wi-Fi speeds. 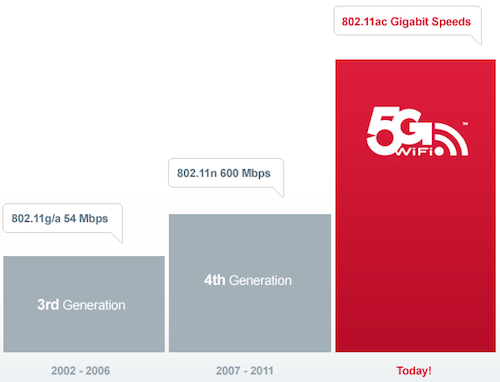 There was speculation a year ago that Apple would transition its Mac lineup to 802.11ac. Well, 2012 has now come and gone and the Mac maker has yet to make the move. Now The Next Web is reporting that the pair has partnered to bring 802.11ac to Macs this year.

These new 5G Wi-Fi chips aren't quite ready for prime time yet, which is why they were never destined for the iPhone 5.

Most consumers probably don't pay for such speedy Internet service and opt for speeds between 3 and 20 megabits per second, or mbps -- well short of the 600 mbps theoretical speeds offered by 4G Wi-Fi. However, those faster theoretical speeds can and do affect internal network speeds that will facilitate faster wireless file transfers and backups, as well as Apple's AirPlay feature.

Broadcom has long been a popular Apple supplier play. The chip maker continues to expand its wins within iDevices, including an additional touchscreen microcontroller spot in the iPhone 5. Broadcom's seat at the Apple buffet is here to stay.