Apple (NASDAQ:AAPL)  is on the march in emerging markets, and it's latest conquest is India. IDC recently released numbers showing the company took the No. 2 spot in smartphone revenue market share this past quarter. But can Apple gain more ground in this Android-dominated country?

Apple as underdog
As recently as 2011, Apple didn't have much to boast about in India's smartphone market. The iPhone maker didn't even register on the top five of smartphone sellers in the country. Samsung's Southeast Asia exec told the Times of India two years ago:

We have a wider product portfolio here and a R&D center to provide localized solutions. We are manufacturing our phones here. We are closer to the market.

It was a statement from a company comfortable with its smartphone market share -- 46% in Q3 2011. On the other end of the spectrum sat Apple, biding its time.

The Cupertino company pounced on India in 2012, increasing its iDistribution through two new distributors and launching the iPhone 5. Apple now holds the No. 2 smartphone revenue spot in the country, but still lags far behind Samsung. Here's the breakdown: 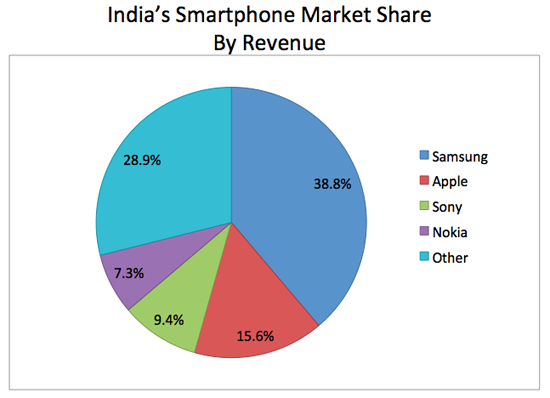 One of Apple's previous problems in India was the iPhone's high price tag, making it unaffordable for many Indian consumers. Apple fixed part of this issue by working with telecom companies and setting up payment plans for the phones so that consumers don't have to shell out the total price all at once.

Keeping the ball rolling
It's no secret that India holds tremendous opportunity for Apple. Smartphones only make up 9.1% of the country's mobile phone market, and smartphone growth is expected to hit 70% in 2013. But Apple's not out of the woods in India. Samsung still dominates revenue market share and cheaper phones flood the market -- something that Apple obviously lacks. In India, the average low-end smartphone costs about $140. The iPhone 4, currently Apple's cheapest offering, costs 265% more than that, reports AppleInsider. All the talk of a cheaper iPhone release could help Apple tap the low to mid-end smartphone market in India, as well as China, but the product it just a rumor as of now. It's up to Apple to keep momentum going in India, which some investors may be worried about, considering Apple CEO Tim Cook's words from the latest earnings call:

I love India, but I believe that Apple has some higher potential in the intermediate term in some other countries. That doesn't mean that we're not putting emphasis in India -- we are. We have a business there; that business is growing, but the multilayer distribution there really adds to the cost of getting products to market. So we're going to continue putting some energies there, but from my own perspective, in the intermediate term there will be larger opportunities outside of there.

Apple's emerging market focus seems to be primarily on China right now, which isn't a bad strategy. With many of India's phones priced significantly lower than Apple's iPhone, the company may not be able to tackle the country head on.

Out with the old
The news of Apple taking the No. 2 spot is certainly promising for the iPhone maker. India is one of the fastest-growing mobile markets and the company's increased distribution in the country will help not only iPhone sales but possibly iPad sales as well. Apple investors should really be hoping for a cheaper iPhone, though. That's the only way for the company to dominate in India's smartphone market.

If Apple refuses to release a cheaper iPhone for emerging markets, investors can only hope that enough consumers in the country will pay for full-priced iPhones on payment plans. That may have helped push Apple to No. 2 in India, but it's not a good long-term plan.

Apple's Growing in India, but Can It Continue? @themotleyfool #stocks $AAPL Next Article
Current