Real people like things that they're familiar with. We often pick the same thing off the menu (even if it wasn't great), and we like to invest in the familiar as well. This preference for the familiar, often referred to as the "familiarity bias," leads us to the faulty assumption that just because we're familiar with something, it must be safe.

One of the more common examples is when people buy the stock of their employer even though doing so rarely makes sense. Most people can't afford the risk of receiving their income from the same company that they have bet their retirement on. A perfect example of this risk was on full display a couple of years ago during the General Motors' initial public offering.

From Detroit to Washington, D.C., the IPO was hailed as everything from a sign that the government did the right thing in bailing out GM to an indication that the economy was finally recovering. At the time, there were a number of articles about GM retirees who were debating whether to participate in the IPO. In case you missed it, many of these retirees lost a significant amount of their savings when GM filed for bankruptcy and their old stock tumbled to cents on the dollar. Yet almost 18 months later, some of these retirees were clamoring to be involved in the IPO. That raises some interesting questions.

Beyond the familiarity bias, retirees need to be asking an even more fundamental question: Should someone who has probably faced serious financial setbacks invest in the individual stock of any company? Imagine the response if you'd proposed to these same retirees that they buy individual shares of another company. They'd probably reply that such a choice was far too risky. But somehow that same feeling of risk doesn't apply to the company they spent years working for and watched crash and burn.

Now that we've considered the individual stock issue, we can't ignore the questionable choice of participating in an IPO. Regardless of what company that IPO is for, IPOs are a risky investment. If the IPO was for any company other than GM, can you imagine the response if you suggested to older, retired people that they invest? Just because it's GM, and just because you worked there your whole life, doesn't make it less risky. 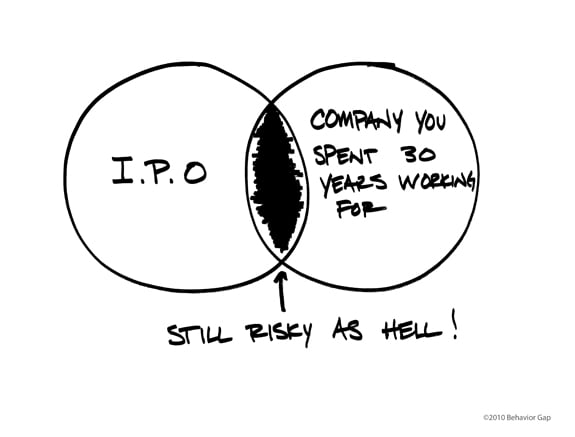 This discussion isn't about whether GM stock is a good or bad investment. The real issue is whether potential investors decided to buy a stock because it makes sense based on their financial plans or because they feel loyalty to a company. We saw what happened to the people who worked at Enron and Tyco. In some cases, employees at those companies were invested 100% in their employer. In a matter of hours, entire portfolios were zeroed out and people were left with no savings and no job.

These weren't the first companies, and they won't be the last, to fall prey to the ups and downs of a market economy. The last thing you want to happen is to lose your job and all your wealth. So be careful to avoid thinking of it as "our" company when you make your investing decisions.

The Motley Fool recommends General Motors and has a disclosure policy.