Please ensure Javascript is enabled for purposes of website accessibility
Log In Help Join The Motley Fool
Free Article Join Over 1 Million Premium Members And Get More In-Depth Stock Guidance and Research
By Dan Caplinger - Apr 10, 2013 at 10:15AM

Drug stocks have done fairly well thanks to some favorable developments.

The Dow Jones Industrial Average (^DJI 0.23%) isn't just for industrial stocks anymore. You can find all sorts of companies in the venerable average, with the Dow representing a nearly all-inclusive cross-section of the entire U.S. economy.

Pharma stocks aren't a huge part of the Dow, with just two of its constituents focused solely on the space and a third reaping a substantial portion of its revenue from pharmaceuticals. Yet pharma stocks have made a big impression on investors because of their lucrative dividend yields. Let's take a look at how these companies have fared so far in 2013 and what their prospects are for the rest of the year and beyond. 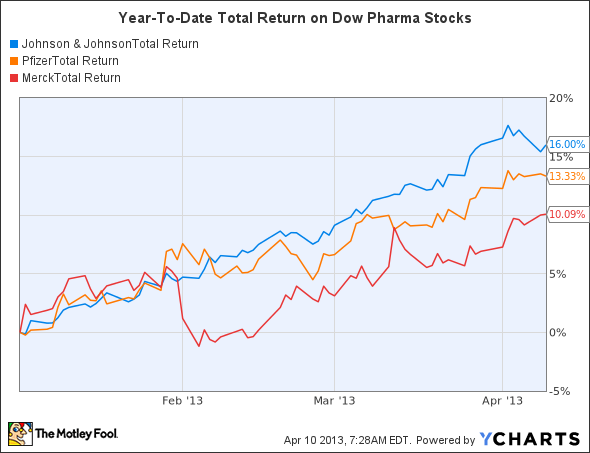 You may not think of Johnson & Johnson (JNJ -0.40%) as a pharmaceutical company, as it's far better-known for its consumer products. But the health care conglomerate also produces proprietary drugs and medical devices, giving it a broad reach over the entire health care industry. Lately, even as the company has faced liability from recalls of its artificial hip replacements, Johnson & Johnson has gotten help from its pharma division, as the approval of its type 2 diabetes drug Invokana represents a big step forward in diabetes treatment that could produce the company's next blockbuster.

Meanwhile, pure pharma stocks Pfizer (PFE -1.18%) and Merck (MRK 0.68%) have both dealt with patent expirations of high-profile drugs over the past couple of years, including Merck's Singulair and Pfizer's Lipitor. Yet while revenue has predictably fallen since generic competition hit the market, both companies have held up better than pessimists had expected.

For Pfizer, anticlotting drug Eliquis, which it co-developed with Bristol-Myers Squibb, has the potential to generate billions in sales over the next decade, having several advantages over rival drugs designed to replace the existing warfarin treatment for atrial fibrillation. Merck still faces some patent-cliff problems, with Vytorin, Nasonex, and Zetia coming off patent over the next four years. But with the combination of existing diabetes drugs Januvia and Janumet and up-and-coming development-stage drugs like insomnia treatment suvorexant and osteoporosis drug odanacatib, Merck has good prospects looking forward.

Keep looking for healthy results
With the pharma industry having turned the patent-cliff corner, pharma stocks should continue contributing to the Dow's overall success. Given the emphasis on dividend income, the big yields that Pfizer and Merck pay will likely remain big drawing points for years to come.