Nokia, Microsoft, and others have filed a complaint to the EU Commission over Android's supposed monopoly in Europe.

It may not prove to be the most effective strategy, but some the world's leading technology companies have filed a complaint to the EU Commission that Google's (GOOGL -4.95%) Android operating system is giving the company a monopoly on mobile, search advertising, and consumer data.

Microsoft (MSFT -0.40%), Nokia (NOK -0.61%), Oracle, and TripAdvisor are teaming up against Google, saying that the company is using Android as a "Trojan horse" to monopolize the mobile marketplace. When it comes to Microsoft and Nokia, it's pretty clear why the two aren't exactly happy with Google's OS dominance. 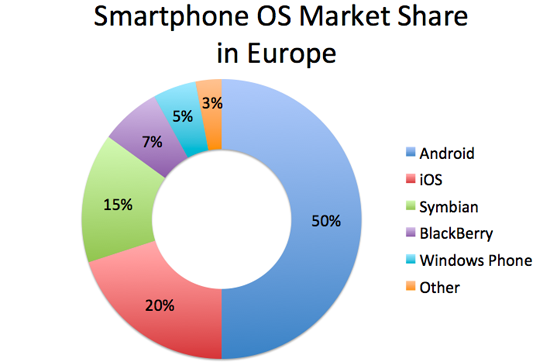 The more market share that the Windows Phone platform takes up, the more Nokia benefits. The EU Commission hasn't even agreed to hear the official compliant by the companies, but in theory it could hear the complaint and come down on Google, and break up some of Android's monopoly. That'd be great news for Nokia, but it's also an unlikely scenario.

Easier said that done
It's not likely this complaint, even if it's heard by the EU Commission, will somehow flip Android's OS domination in Europe. But one thing that lawmakers seem keen on listening to is consumer data protection. The latest complaint says that back in April six European data protection agencies began investigating if Google broke EU laws when it consolidated its Google account online policies. It also says that Google had to pay the FTC back in August to settle charges that it misled Safari browser users.

If Google's already painted in a bad light for how it handles user data, the Commission may be more apt to hear the complaint and do something about it -- in the name of consumer privacy protection. Even if some sort of judgement or settlement comes about from this, the Android platform isn't likely to fall apart any time soon, and neither is Google's mobile search dominance.