Dividend stocks outperform non-dividend-paying stocks over the long run. It happens in good markets and bad, and the benefit of dividends can be quite striking -- dividend payments have made up about 40% of the market's average annual return from 1936 to the present day. But few of us can invest in every single dividend-paying stock on the market, and even if we could, we might find better gains by being selective. That's why we'll be pitting two of the Dow Jones Industrial Average's (DJINDICES:^DJI) dividend payers against each other today to find out which Dow stock is the true dividend champion. Let's take a closer look at our two contenders now.

Tale of the tape
IBM (NYSE:IBM) will be a 34-year veteran of the Dow by the end of next month. Based in the suburbs north of New York City, IBM has been producing cutting-edge technology for over a century, which gives it real claim to the title of "World's Oldest Tech Company." IBM employs over 430,000 people, but it's remarkably nimble for such a massive company. "Nonstrategic" parts of IBM's business worth a total of $15 billion in annual revenue have been divested over the past decade, and its three major new initiatives (Smarter Planet, data analytics, and cloud services) all enjoyed double-digit revenue growth in 2012. Due to the Dow's price-weighting system, IBM is its single most important component -- a move in IBM stock prices will have several times the impact of a move in nearly every other stock on the Dow.

AT&T (NYSE:T) has been part of the Dow for over 13 years under its new corporate identity, but the original telecom has been a component in one form or another, without interruption, for 74 years. Like IBM, AT&T was one of the earlier Dow components, but was removed during the tumultuous Roaring '20s (IBM actually lost its original spot on the Dow to AT&T in 1939 when the latter rejoined). Although AT&T is now primarily known as a wireless service provider (it has 107 million wireless subscribers), the company also provides broadband access, cable television subscriptions, and other connectivity services. All told, AT&T's Internet backbone carries an estimated 33 petabytes of data each day. That's over 15 million hours of high-definition streaming video!

Although IBM squeaks ahead on market cap and profit margin while posting a far better total return for the past five years, AT&T is no slouch on free cash flow, which is an important consideration for dividend sustainability. Which of these two old-guard tech purveyors will triumph today?

Round one: endurance
Both IBM and AT&T have a long history of dividends. IBM began paying dividends all the way back in 1913, and has been making quarterly distributions since 1916, for a 97-year streak. However, AT&T's dividend history dates all the way back to 1893, for an uninterrupted streak of 120 years. Sorry, IBM. This is one contest you joined too late.

Round two: stability
Paying dividends is well and good, but how long have our two companies been increasing their dividends? The same dividend payout year after year can quickly fall behind a rising market, and there's no better sign of a company's financial stability than a rising payout in a weak market (as long as it's sustainable, of course).

IBM suffered a tough time in the early 1990s as its commitment to competing for PC market share eroded profitability. The company had to lower dividends as a result, which means that dividend growth has only been under way since 1996. AT&T, on the other hand, has been raising its payouts since 1959, following an extended streak of stable dividends.

Round three: power
It's not that hard to commit to paying back shareholders, but are these payments enticing, or merely tokens? Let's take a look at how both companies have maintained their dividend yields over time as their businesses and share prices have grown: 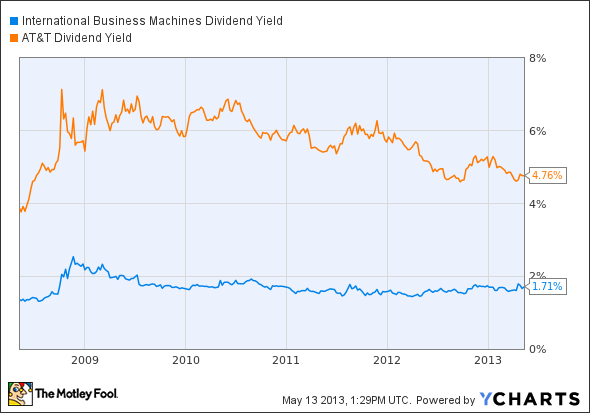 Round four: strength
A stock's yield can stay high without much effort if its share price doesn't budge, so let's take a look at the growth in payouts over the past five years. If you bought in several years ago and the company's grown its payout substantially, your real yield is likely look much better than what's shown above. This one looks to be just as close as the last one: 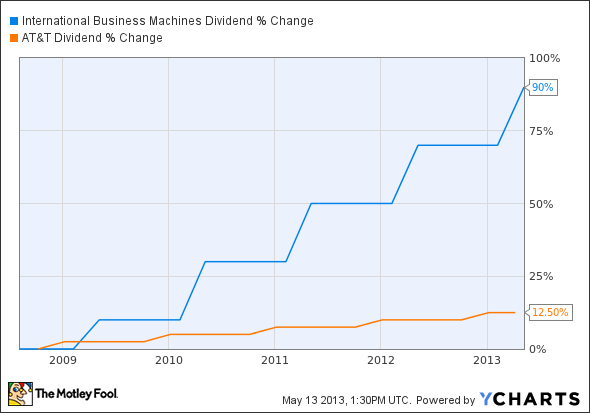 Round five: flexibility
A company -- even one as well-positioned as IBM or AT&T -- needs to manage its cash wisely to ensure that there's enough available for tough times. Paying out too much of its free cash flow in dividends could be a warning sign that the dividend is at risk, particularly if business weakens. This next metric analyzes just how much of their free cash flows our two companies have paid out in dividends over the past four quarters: 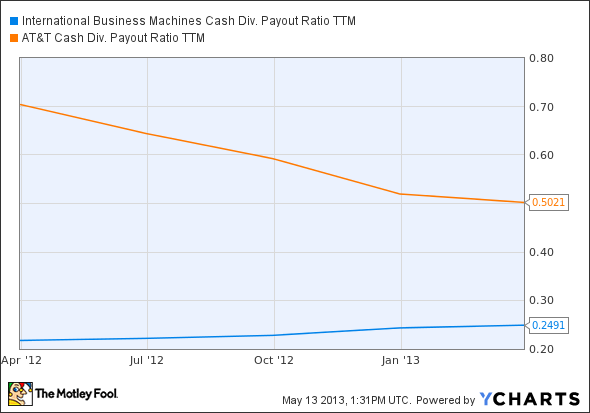 Despite a spirited comeback, IBM simply can't overcome AT&T's advantage of time. Had the company not bungled the transition from mainframes to PCs so badly, things might have turned out differently, as IBM boasted a strong history of dividend growth before those two awful years of historic unprofitability. There's no doubt that the strength of AT&T's market position will help it keep its yield high for years to come -- but will that be enough to make it a better buy than the faster-growing IBM?