Reliability and steadiness are essential to any successful career, whether you're a teacher, a doctor, an engineer, or a barber. That's because these qualities are directly tied to long-term performance. You won't achieve success over the years if you don't stick to your principles, if you fail to learn from your mistakes, or if you regularly change your approach without good reason. We know this to be the case in our working lives, but when it comes to investing, studies show that a majority of individual investors do just the opposite: They unreliably change course all the time, and not surprisingly, the results are dismal.

Missing most of the upside
The best-performing mutual fund from 2000 to 2010 was the CGM Focus Fund (CGMFX), which returned more than 18% annualized despite a flat S&P 500. The fund's outstanding track record would have turned $100,000 into more than $500,000 over those 10 years. The only problem? According to Morningstar, the average investor in the fund actually lost 11% annually over those same very successful 10 years. That is not a typo: The fund gained 18% annualized, but its average investor lost 11% annualized. You're not crazy to ask how that is possible.

The answer is that many fund holders tried to time the market. For example, the fund soared 80% in 2007, so hordes of investors poured money into it in 2008 -- only to see it fall 48% that year. That decline led investors to pull money out in 2009, taking losses soon before the market soared from its low. Investors were making emotional decisions based on recent events, changing their stance repeatedly, and as emotion would have it, at the most inopportune times.

Not just one fund; it's universal
According to an investing study from Davis Advisors, the average stock-holding mutual fund returned 9.9% annualized from 1991 to 2010, but the average fund owner earned only 3.8% on average per year. 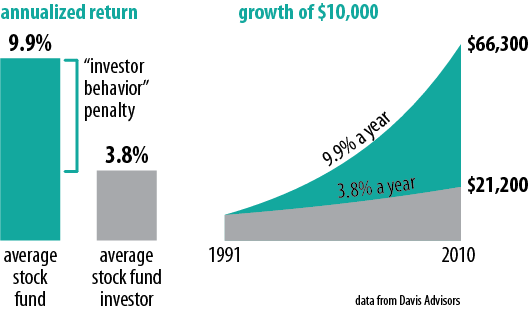 Not pretty. And it hurts even more if we put this performance into dollars. By trading in and out of funds, the average fund owner increased a $10,000 investment to just $21,200 over nearly two decades -- while the average fund turned that $10,000 into $66,300. Now imagine the continuing effects of compound returns on both of those amounts and the growing difference between them over a lifetime. Feel the pain. Remember it next time you're tempted to make a trade. Davis also finds that the less trading a fund itself does, the better the fund's results tend to be. What's true for individuals is true for funds, too.

Successful investing includes many bad years
All great investors suffer years of poor results, bar none. It's just how the market is. Warren Buffett's partner, Charlie Munger, has an outstanding lifelong record, but his annual results lagged the S&P 500 index 29% of the time. An impatient investor would have left Munger during some of his down years and missed out on riches later.

And Munger is far from alone. According to Davis Advisors, investors who achieve the strongest records aren't always at the top of the performance list. Over a 10-year period, Davis studied 192 large-cap money managers who had previously ranked in the top 25% for performance. They found that:

In other words, over this 10-year period, you could expect most of the best investors to be ranked among the very worst about one-third of the time.

This data clearly illustrates why impatient investors lose out: They go from vehicle to vehicle seeking results based on recent performance. They sell when one asset is down only to buy another asset that may be up recently; but that asset is just as likely to go down next -- because nearly all investments and all investors have weak periods. As we showed above, chasing performance by looking in the rearview mirror can turn a 9.9% annualized return into 3.8%. Sitting tight would be so much better.

Stay the course
As with any career, steadiness and persistence are necessary for successful investing. But don't take that to mean you'll always do well. There will be years in which your results disappoint you, and years in which your successes are far greater than you thought possible. That's why it's vital to invest in ways that truly make you comfortable, so you don't lose faith during rocky periods. Because the final point to remember is that historically, 10-year periods of weak stock market performance are followed by 10 years of much stronger results.

Even now (especially now!), investing is a lifelong pursuit. At Motley Fool Pro, we own companies we believe will grow value over the next three years and beyond; most of our portfolio is currently invested in such businesses. We're hedged, too, because we want to make money during market declines, as well, and then reinvest that money in cheaper stocks. This is our steady, proven strategy that we adhere to -- and we look forward to growing our investment returns with members, in up and down markets, the Pro way.

If you're interested in hearing more of these strategies, Motley Fool Options and Motley Fool PRO are hosting FREE introductory programs this month, called Options Whiz and PRO Academy. Click here for more details and to sign up!