I jest, of course. Stocks can't go up forever. There are only so many buyers. Three months of continually higher prices is pretty impressive. And except for a few brief pauses, the run has actually been much longer. 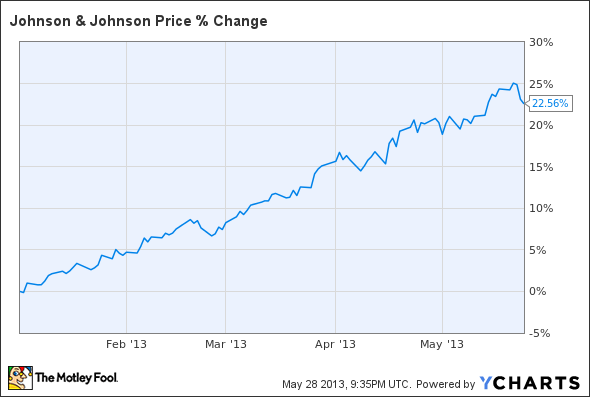 What sent Johnson & Johnson stock on its terror

I think it's confidence more than anything. Investors were a bit spooked by the rash of recalls. From May 2010, when the recalls came to fruition, through the end of last year, Johnson & Johnson stock was up just 9% compared to 20% for the S&P 500.

On the first quarter conference call, management said that three-quarters of the recalled over-the-counter products are scheduled to be back on the market by the end of this year. As confidence grew that the company could get things back on track and there wouldn't be a long-term effect on the reputation of its products, it became easier to ascribe a higher value to Johnson & Johnson stock.

What it'll take to keep Johnson & Johnson stock going
The easy part is over. Growth of Johnson & Johnson stock is going to come from growth in revenue and perhaps an expansion of margins. The conglomerate is famous for the latter, especially using its size to lower margins for acquisitions like its recent purchase of medical device maker Synthes.

To increase revenue, Johnson & Johnson needs a mixture of growth from older products, successful launches of new products, and a pipeline that pushes products from the clinic through Food and Drug Administration approval.

For the older products, investors should keep their eyes on psoriasis treatment Stelara and antipsychotic Invega Sustenna. Both are growing at a substantial clip.

As for new drugs, watch Incivo, which Johnson & Johnson sells abroad for Vertex Pharmaceuticals (NASDAQ:VRTX). While U.S. sales of Vertex's hepatitis C drug -- called Incivek stateside -- have slumped as patients wait for newer medications, sales outside the U.S. continue to increase, benefiting both Johnson & Johnson and Vertex, which receives a royalty on sales.

Johnson & Johnson recently launched Invokana, its diabetes medication that's in a new class of drugs called SGLT-2 inhibitors. Invokana is a good drug, but I suspect that its uptake will be slow, simply because the other diabetes drugs work fairly well. Doctors are comfortable prescribing Merck's (NYSE:MRK) Januvia, the top-selling oral diabetes medication, because they have experience with it and know that few patients will have side effects. Until doctors gain experience with the drug, the market for Invokana will likely come from its use once other oral drugs have stopped working.

Later this year, we should see an FDA approval for hepatitis C treatment simeprevir. The drug appears to have a slight -- probably inconsequential -- lead on Gilead Sciences' (NASDAQ:GILD) sofosbuvir. Both drugs have a future as a part of cocktail with other oral drugs, but probably won't generate large sales on their own since they have to be taken with injected pegylated interferon drugs. Most patients will continue to wait for the all-oral cocktails in development.

Gilead's pathway is pretty clear with home-grown compounds to pair up with sofosbuvir, but Johnson & Johnson is testing simeprevir with multiple partners. In the long run, more shots on goal could mean more sales by potentially developing a better combination, but the downside is that Johnson & Johnson has to share revenue and that development may be slower, as partnerships rarely move as quickly as internal development.