Investors love stocks that consistently beat the Street without getting ahead of their fundamentals and risking a meltdown. The best stocks offer sustainable market-beating gains, with robust and improving financial metrics that support strong price growth. Does Himax Technologies (NASDAQ:HIMX) fit the bill? Let's take a look at what its recent results tell us about its potential for future gains.

What we're looking for
The graphs you're about to see tell Himax's story, and we'll be grading the quality of that story in several ways:

What the numbers tell you
Now, let's take a look at Himax's key statistics: 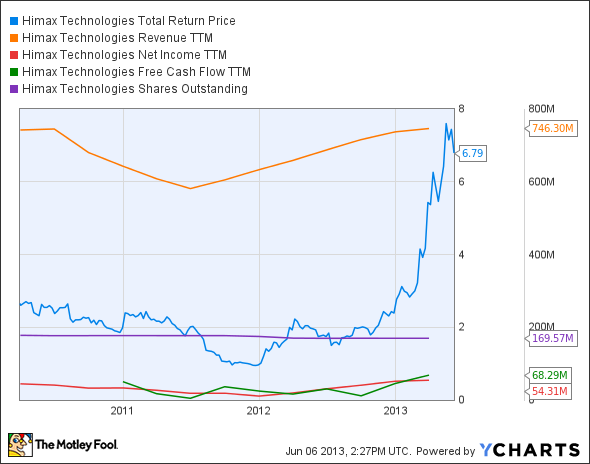 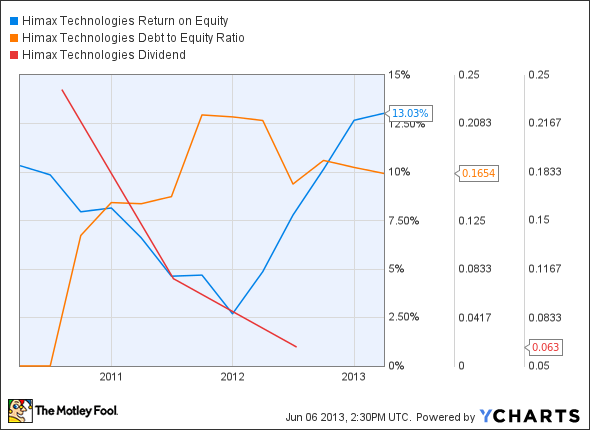 How we got here and where we're going
Himax earns a respectable, if not strong, five out of nine passing grades today. Yet, its shares have skyrocketed recently (costing it another pass), so investors clearly think there's a big story here. Part of that story initially circled around a key supplier relationship with Google (NASDAQ:GOOGL) and its next-gen Glass wearable computer, but there might be cause for optimism without being part of the tech world's most controversial new product. Let's take a look at the facts on the ground.

Himax's latest earnings, and its forward guidance, show a company making solid progress in a fiercely competitive arena. The company's technology is so appealing to some analysts that they envision Himax becoming a household name -- a tall order indeed for a component supplier. Can you name any other display-tech manufacturers that are well-known outside the teardown field, or beyond small circles of dedicated investors? Still, it won't need to be a household name to keep growing from here. It just has to get into more devices.

This opportunity seems to be just around the corner. Although Google has yet to confirm Himax's role in the Glass display overlay (what do you call a screen in a little transparent square, anyway?), there's also been some intense speculation that Microsoft and Sony are both using Himax technology, as is Samsung. Himax itself has been tight-lipped about its customer base, but has mentioned that its micro-display driver technology has "a very good number of customers," and the double-digit growth projections for the company's second quarter seem to support that assertion.

While Himax's dividend payment has not been confirmed yet for 2013, it's quite possible that the company might raise the payout, as its cash on hand has grown quite a bit in the past six months. As progress continues on sales and earnings, it's also possible that Himax might pick up a couple of extra passing grades on our analysis. I'd keep my eye on this company. It's not just a Google Glass story, even though that might have been the catalyst pushing its share price higher.

Putting the pieces together
Today, Himax has some of the qualities that make up a great stock, but no stock is truly perfect. Digging deeper can help you uncover the answers you need to make a great buy -- or to stay away from a stock that's going nowhere.