Of course, this shouldn't come as a surprise, especially considering Buffett promised years ago he would gradually give away the bulk of his fortune to those five charities, beginning in July 2006 with 602,500 total shares of Berkshire Hathaway stock. Most notably, 500,000 of those shares would go to the Bill and Melinda Gates Foundation.

Then, with each passing year, Buffett said he would decrease the number of shares by 5%.

What's changed
That said, if you're wondering why that "decreasing by 5%" math doesn't stack up with the number of shares Buffett just gave away this July, note a few things have changed since then.

First, shortly after Berkshire's acquisition of Burlington Northern Santa Fe was announced in late 2009, Berkshire shareholders approved a 50 for 1 split in their Class B shares, largely to make it easier for smaller BNSF shareholders to opt for the tax-free exchange into Berkshire Hathaway stock if they so chose.

Short of simply splitting up the Class B pie into smaller slices, then, this was a zero-sum game that didn't otherwise affect the value of Buffett's charitable contributions.

Second, as fellow Fool Justin Loiseau noted Monday, Buffett last year decided to double the amount of stock he would give each year to his children's foundations (which collectively account for three of the five aforementioned organizations) after he was pleased with the work they were doing.

Why smaller is bigger
Putting share price semantics aside, though, there's one big reason less is more when it comes to Buffett's giving.

Despite the fact that The Oracle is methodically reducing the number of shares he gives away each year by 5%, take a look what Berkshire Hathaway stock has done since he announced his selfless pledge in late June of 2006: 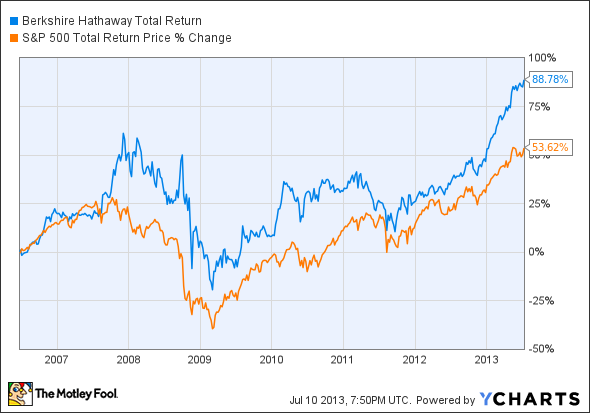 Wouldn't you know it? Berkshire Hathaway stock -- the performance of which is directly influenced by the greatest investor in the world -- has risen almost 89% since then, outpacing the S&P 500's perfectly respectable total return by more than 35%.

Then again, you can bet Buffett already knew Berkshire's gains would almost certainly have little trouble offsetting the 5% annual decline in the number of shares he was giving, anyway. And for those of you familiar with the high-quality plethora of operating segments that make up the enormous conglomerate that is Berkshire Hathaway, there's little reason to believe Berkshire Hathaway stock won't be able to continue its long-term streak of outperformance.

That, my Foolish friends, is why Buffett's predictable annual gifts will only get bigger as time goes on.

Why Buffett's Gifts Will Only Get Bigger @themotleyfool #stocks $BRK.A $BRK.B Next Article
Current