Last week, Range Resources (NYSE:RRC) announced that its second-quarter production volumes had reached a record high of 910 million cubic feet equivalent per day, or MMcfe/d. That's up 27% over the same time last year and well ahead of the top end of its own guidance of 890 MMcfe/d. However, as great as those numbers are, this company has a lot of room to run, which is even greater news for investors in its stock.

Those investors have already been well rewarded this year; the stock is up about 23% while the market, as measured by the S&P 500, is up about 18%. However, when looking at the company's long-range plans, which include long-term production growth between 20% and 25%, it's easy to get the feeling the company is still in the early innings. That's especially true when considering that the company believes it has between 48 trillion and 68 trillion cubic feet equivalent of total resource potential: 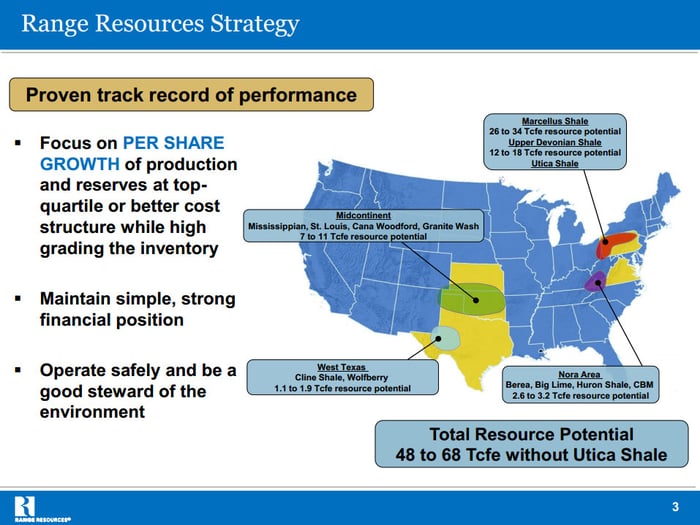 Range believes its resource potential is seven to 10 times more than its proved reserves. That's an unbelievable upside, even more so when put into the perspective that Range has a very low cost structure, which has been getting better over time, evident by the fact that its costs are down 30% since 2008. What that means is Range can profit even when natural gas prices are low. It also means Range profits even more when gas prices rise. This is exactly what happened last quarter as the average second-quarter price for natural gas improved $0.63 per Mcf over last quarter, and a full $2.00 per Mcf over the same quarter of last year.

While the Marcellus Shale has been the big driver of Range's business over the past few years, the company has acreage in three other emerging plays that investors should keep an eye on. First up is its Utica/Point Pleasant/Upper Devonian potential which could hold well over 18 Tcfe of potential resources. While Range has significant acreage positions, it's going to spend this year observing and studying the 25 planned industry wells around its acreage. Range has seen peers like Devon Energy (NYSE:DVN) bail on the Utica due to lack of success, which serves as a reminder that this play is still very much up in the air.

Another area the company is watching closely is that which holds the Cline Shale and Wolfberry play in Texas. Range is again going to study the industry activity of peers like Devon, which is planning to drill several wells into each formation this year. The key here for Range is to let its peers spend the more risky exploration capital, which will enable it to earn its stockholders steadier returns as its own risk is reduced.

One final area of upside for Range is the Mississippi Lime formation, where it's following in the footsteps of industry trail blazers like SandRidge Energy (NYSE: SD), which was the first mover on the play. SandRidge has already drilled over 725 wells, which has really de-risked the play for the rest of the industry. This has enabled companies like Devon and Range to follow its blueprint, which includes how to strategically place saltwater disposal wells, in order to produce the best rates of returns.

The key takeaway for investors is that Range is laser-focused on returns, which means it's not always the first mover when it comes to emerging oil and gas plays. However, this is one reason why its operating costs are so low, which helps the company to profit when prices drop, while enabling it to reap a fantastic harvest of profits for stockholders when prices rise. The company's focus has served investors well, as evidenced by its record-breaking production report this quarter.