Samsung always seemed destined to rise to the top of Google's (NASDAQ:GOOGL) Android platform. Nokia saw it coming, which is precisely why it wasn't interested in embracing the search giant's operating system and went with Microsoft Windows Phone instead.

OpenSignal has now released a new detailed report on the fragmented state of Android, and Samsung's dominance is abundantly clear. The South Korean conglomerate now owns nearly half of the entire Android market. Samsung's broad portfolio of devices targeting every market segment comprises 47.5% of all Android gadgets. That's an immense lead over the No. 2 Android OEM brand, Sony-Ericsson, who has just a 6.5% market share within the platform. (Sony bought out Ericsson's stake in the joint venture years ago, but many of those devices are still floating around out there.) 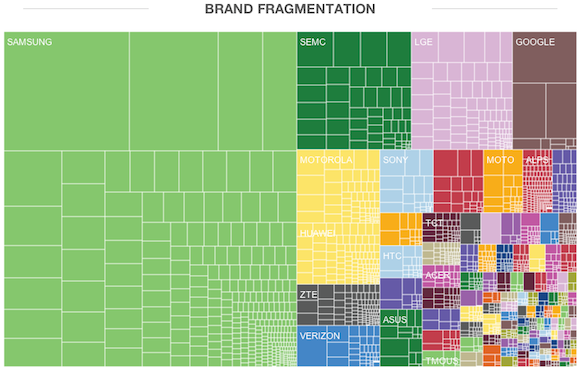 While HTC was once a major player within Android, the Taiwanese company's recent missteps and refocused strategy has made its share decline to less than 3.9%.

Overall fragmentation within Android continues to rise, in terms of both hardware and software. OpenSignal recorded nearly 12,000 distinct Android devices this year and operating system versions remain primarily split among 3 different major Android releases (Gingerbread, Ice Cream Sandwich, and Jelly Bean). In no uncertain terms, the report asserts that Android is "the most fragmented it has ever been."

Samsung's overwhelming power over Android is particularly meaningful considering its recent efforts to undermine Google's underlying operating system in favor of promoting its own differentiated interface and features. The most influential OEM is now also the one most interested in downplaying it to the extent that it can set itself apart.

Google certainly appreciates everything that Samsung has done in contributing to Android proliferation, but Samsung's rise still presents a very real risk to the search giant. Motorola may be bleeding, but it's still an insurance policy should Samsung ever decide to go rogue.