Editor's note: A previous version of this article did not state that VIVUS raised cash through a follow-on offering in 2011. It has been edited to incorporate this information.

How do you track the value of companies you're invested in? If you're like most people, you probably check the increase or decrease in share price.

Hate to tell you this, but you're doing it wrong.

After my article on MannKind (NASDAQ:MNKD) earlier this week, a reader wasn't too happy about my view that the company was overvalued given the most recent phase 3 data.

"Why was MNKD at 10 last time around at this juncture and suddenly we have everyone wanting to cut it down," the reader asked in an email. 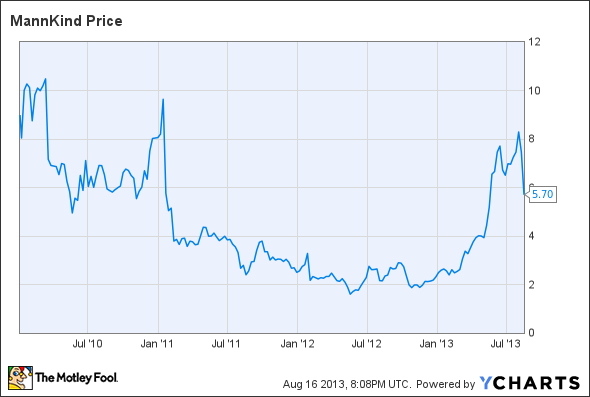 The reader is arguing, as you can see from the chart, that MannKind hasn't reached the level it was the last time it was on the cusp of an approval for its inhaled insulin Afrezza. With an approval as likely -- I'd argue, more likely -- than it was in March 2010 and January 2011, before the first and second FDA rejections, shouldn't MannKind be valued as high as it was back then?

Turns out it is. Higher even. 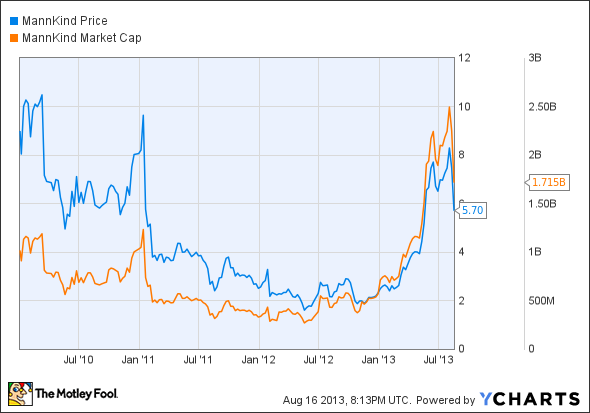 Part of the biotech game
Investors who bought before the last FDA rejection haven't recouped their losses, but it's hard to fault MannKind. Drug development costs money. Capital raises are a necessary evil, and they're painful for investors when cash is needed when valuations sink after surprise rejections.

Here's a look at a few more companies that have had recent failures to illustrate the point. The theoretical share price is based on the 2011 weighted average diluted share outstanding and the current market cap. Essentially it's the price if the company hadn't sold any shares recently.

The FDA sent all three obesity drug companies -- Arena, VIVUS, and Orexigen -- back to the drawing board, causing share prices to drop. Arena and VIVUS were eventually able to get their drugs approved without any additional clinical trials, but Orexigen had to run a large safety study, necessitating a large capital raise. Its market cap also dropped the lowest of the three, making raising cash more dilutive to shareholders.

There's one more moral to this story. While the table makes VIVUS look like a saint, the company did raise a little cash in 2011. Even with that raise, though, VIVUS has been a little more judicious with its cash, increasing its share count by 25% over the last three and a half years compared to Arena, which increased its share count by 142% over the same time frame.

Foolish take-home message
Investors would be much better off if brokerage firms and finance websites would give quotes in market caps rather than share prices. Over the short term, share price is an OK indication in change in value, but over the longer term, share price becomes fairly meaningless as companies sell shares, diluting current shareholders. As an added bonus, it would give investors a relative valuation compared to its peers.