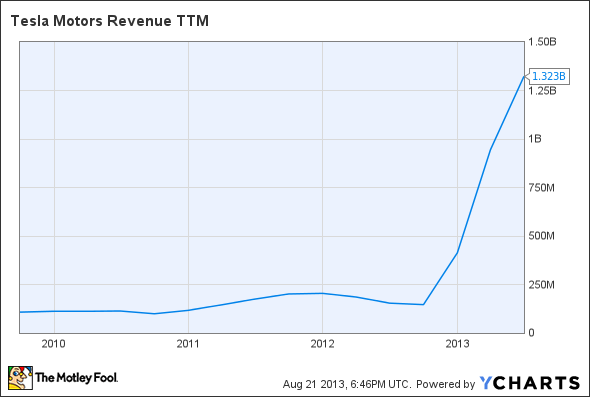 Accelerating from zero to 60 in 3.7 seconds, Tesla's Roadster was the company's first hit. With the Roadster, Tesla showed the world that all-electric vehicles can perform on par with sports cars. Even more, the Roadster boasted meaningful driving range at 245 miles per charge -- more than any other electric car.

As seen in the revenue chart above, Tesla Motors essentially exploded onto the scene. But it wasn't because of the Roadster -- it was because of the Model S. This premium, all-electric sedan officially made Tesla a formidable competitor in the luxury car market.

Starting at $70,000, the Model S boasted over 200 miles of driving range. It served up unprecedented performance -- not just among electric cars, but among every car ever sold in the U.S. -- according to Consumer Reports, which gave the car 99 points out of a possible 100. And when it comes to safety, the Model S is second to none.

Consumers loved the value proposition. After the first deliveries in the U.S. in 2012, the Model S has already captured 8.4% of the large luxury car market for the first half of 2013.

Since the launch of the Model S, sales have been limited by supply constraints -- not demand.

As the company continues to sell increasingly more cars, economies of scale and production efficiencies are significantly boosting its automotive gross profit margin.

As seen in the chart above (on the right), Tesla believes there's significant room to improve its gross margin. Though the company did not provide specific guidance for its automotive third-quarter gross profit margin (excluding zero-emission vehicle credits), it does have a fourth-quarter target for an impressive 25%. In fact, Musk believes that the company's gross profit margin could "get close to exceeding Porsche's over time," he told Bloomberg Businessweek. Before Porsche was acquired by Volkswagen, it was reporting a gross profit margin greater than 50% on its luxury sports cars. 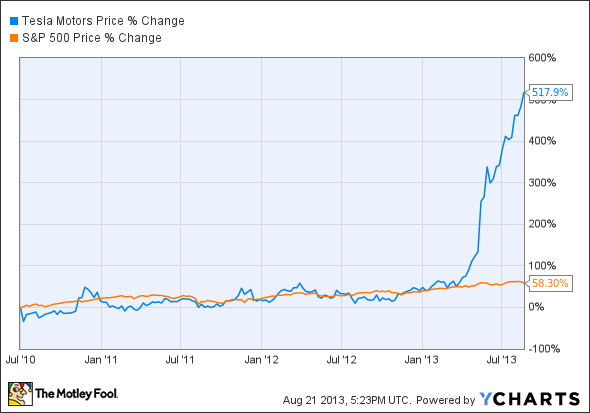 The company's growth story has rewarded shareholders handsomely while leaving bears in the dust.

Whether or not the stock is a buy at today's inflated price is a matter of debate, but there is no denying the company's impressive execution evident in its soaring revenue and fast-improving profitability.