Shares of Take-Two Interactive (NASDAQ:TTWO) hit a fresh 52-week high this week, and it's not necessarily the past that has investors excited. Shares of the Rockstar Games parent have nearly doubled over the past year in anticipation of next month's release of Grand Theft Auto V.

It's easy to see why the market's excited. More than five years have passed since Grand Theft Auto IV set initial sales records. The industry itself has gone into a tailspin in that time, as social and casual games on smartphones, tablets, and social-networking websites have eaten into the industry's revenue.

Diehard gamers are still there. There's no joy in Candy Crush Saga or Plants vs. Zombies for them. However, they have been fewer in number, as hardware and disc-based software sales have fallen every year since 2009.

Thankfully for Take-Two, the trend in recent years has been for gamers to ignore all but the marquee releases. Despite dwindling sales for the industry overall, Activision Blizzard's (NASDAQ: ATVI) annual Call of Duty installments continue to set new records.

That's good news as the market's bracing for the Sept. 17 release date of the gritty title. 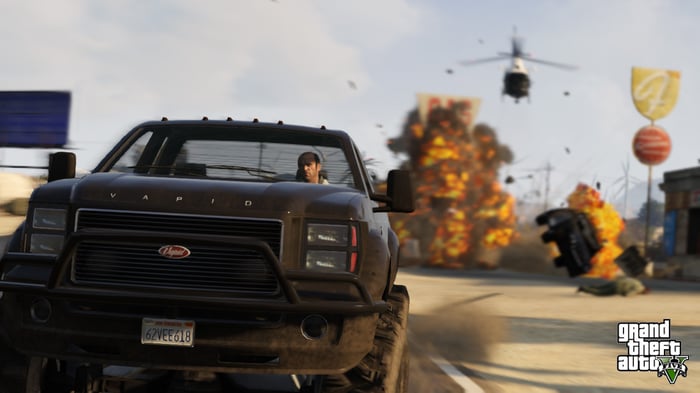 How big will the game be? Well, GameStop (NYSE:GME) delighted investors on Thursday by forecasting an 11% to 15% spike in store-level comps this quarter. Grand Theft Auto V is the quarter's big release, as Call of Duty: Ghosts as well as the potentially game-changing release of the Xbox One and PS4 consoles won't take place until November.

GameStop has posted nine consecutive quarters of negative comps, and it's banking on Take-Two's release to turn that around.

"I can't clarify exactly what the impact on the comp is of Grand Theft Auto V, but obviously, it's going to be a huge title," GameStop's CFO noted in Thursday morning's earnings call, also pointing out that it will be the only U.S. retailer that will be selling a $150 collectors' edition.

Surely there's some irony in shelling out $150 for a collectible version of a game about living a life of crime.

There will be less drama surrounding Take-Two itself than there was when Grand Theft Auto IV was released in April 2008. Electronic Arts (NASDAQ:EA) made several offers to buy out Take-Two in the months preceding and following that game's release, and shareholders rebuffed EA's advances every time. There doesn't appear to be a repeat performance out of EA this time around.

Take-Two continues to trade well below EA's original offer to cash out investors at $26 a pop, but you won't find too many newer shareholders complaining about a stock that opened at a new high on Friday morning, 89% ahead of where it was a year earlier.

The game's afoot, and that foot just happens to be on the accelerator.