Following last week's weak new-home sales report, today we saw a 7.3% decline in orders for durable goods -- far worse than the expected 4.9% decline. Both will give the Federal Reserve plenty to think about as it considers when begin winding down its bond-purchasing program, known as quantitative easing. Some investors seem happy that "tapering" could be further delayed by these negative economic reports, but people must remember that when the economy improves, it's on its way to a real recovery, and when the Fed decides it's time to pare back QE, that will be a good thing.

Turning to individual stocks, here are some of today's movers and shakers within the Dow Jones Industrial Average (DJINDICES:^DJI).

Home Depot's (NYSE:HD) stock price is having a delayed reaction, surging 2.9% today as of 2:55 p.m. EDT. Last week Home Depot delivered a fantastic quarterly report and even raised guidance for the remainder of the year, but the stock refused to budge, trading flat throughout the week. Home Depot presents an intriguing way to play the housing rebound, and the company has historically been consistent in returning value to shareholders through increased dividends. 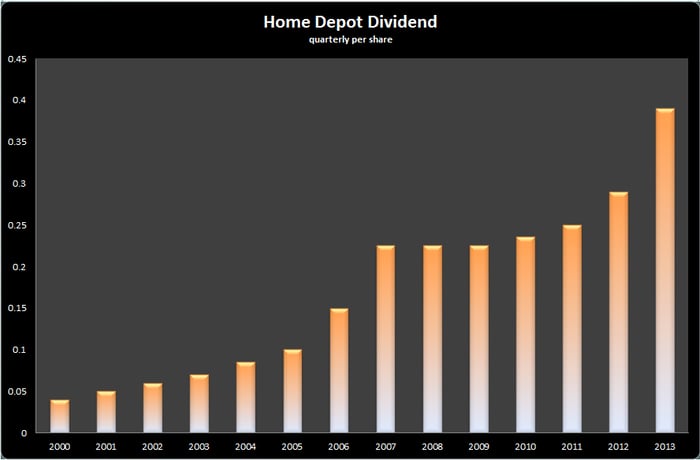 One thing for investors to watch will be the company's expectations in 2014 and beyond. Home Depot has grown through store expansion, but as the U.S. market becomes more saturated with home improvement stores and that growth begins to slow, investors may be expecting lofty growth numbers to appear out of thin air -- that's never a good thing. Home Depot could still continue to grow its comparable-store sales at a high clip if home owners continue to take on home improvement projects as the economy improves.

Another one of today's winners is American Express (NYSE:AXP), up 0.8%. American Express was rated the highest in customer satisfaction by consumers, according to a study by J.D. Power & Associates. That marks the seventh straight year American Express has won the award, and happy consumers often make for a healthy company, thereby rewarding investors. Another bright spot for the company is that its credit cards account for a large percentage of spending on electronics, which looks set to expand in our increasingly digital world. The company is also allowing third parties to issue cards, which should continue the expansion of its credit card network.

Outside the Dow, Thompson Creek Metals (NYSE: TC) continues its recent tear on the market, surging almost 5% today. Thompson Creek is up roughly 30% over the last month after reporting a solid second quarter and processing its initial haul of gold and copper from its Mt. Milligan mine -- full production will start next quarter. You could call my Foolish colleague Sean Williams biased, but you also have to admit that his prediction for the best stock to buy in August was dead on. The stock took a beating after the Mt. Milligan mine project was delayed and exceeded cost predictions. Fast-forward to today, as Mt. Milligan begins to pump out gold and copper, and the stock price should be poised to continue its recent surge.