As Netflix (NASDAQ:NFLX) stock has soared in 2013, company insiders have been cashing in on their stock options and heading for the exits at an alarming rate. There are many reasons that a public company's officers and directors might sell immediately after exercising stock options: They could be looking to supplement their cash earnings. They might need the money to offset tax liabilities. Or they may want to diversify their risks.

However, this behavior could also be a sign that insiders think their company's stock has become overvalued. This year's flood of insider selling at Netflix has been extreme enough that it is hard to attribute everything to "benign" motives. A more plausible explanation is that Netflix insiders haven't bought in to the enthusiasm that has caused the stock to triple this year. 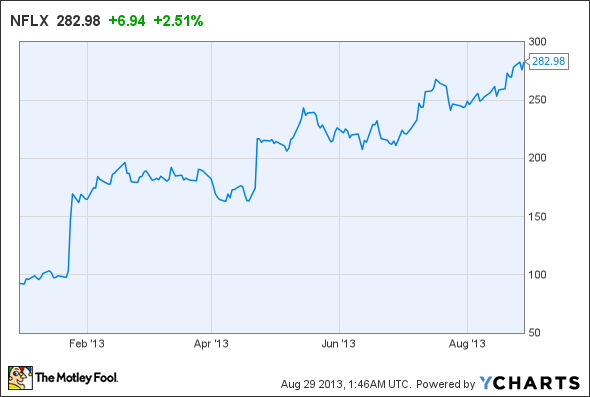 If Netflix insiders are skeptical of the stock's recent run, other investors could run into trouble soon. If the company's future growth falls short of Mr. Market's expectations, the stock could easily drop by 50% or more as it did in 2011.

Steady selling
Netflix insiders have been exercising their stock options to cash in on Netflix's rapid rise since early this year. For Q1, Netflix insiders exercised options for 556,819 shares of stock at a weighted-average price of $70.30 . By contrast, fewer than 200,000 options were exercised in all of 2012 due to the stock's massive drop from its 2011 peak to the 2012 trough. Option exercises continued at a rapid pace last quarter, bringing the total for 2013 to just more than 1 million options exercised at an average price of $67.70.

Bailing out has been an equal-opportunity sport for Netflix insiders. Netflix CEO Reed Hastings stated early this year that he had options expiring every month beginning this summer, and that he planned to sell as the options hit their expiration dates . Sure enough, beginning in late June, Hastings has exercised options to buy 15,238 shares each month and immediately sold the stock, booking millions of dollars in capital gains each time.

Despite this selling, Hastings remains a major shareholder in Netflix, with more than 1 million shares held in trust. Thus, Hastings' actions do not suggest that he expects Netflix to crash anytime soon. (That said, Hastings pointedly declined to comment about whether he was "comfortable" with the valuation of Netflix stock during the company's Q2 earnings interview.)

Other company insiders have shown less faith in Netflix's potential. Just in the past two months, two of the six independent directors on Netflix's board have made major sales. In July, George Battle sold more than 23,000 shares of Netflix stock, while Timothy Haley sold nearly 20,000 shares in August. Director Leslie Kilgore (who was Netflix's chief marketing officer until early 2012 ) has been selling at a steadier pace over the course of the year, dumping nearly 40,000 shares in total.

Foolish bottom line
Netflix executives may seem confident in the company's future when they appear on conference calls or talk to the media. However, a look at what they are doing casts doubt on this facade. Numerous Netflix officers and directors are selling millions of dollars worth of stock acquired through options. Aside from Reed Hastings, most of these insiders do not have significant long-term holdings of Netflix stock.

Of course, insider selling does not guarantee that a stock is going to fall. However, the behavior of many Netflix insiders suggests that their incentives may not be fully aligned with those of long-term shareholders. By exercising stock options and selling immediately, these officers and directors are banking millions of dollars of profits based on Netflix's current stock price. If this year's Netflix stock rally turns out to be yet another bubble, these insiders will not suffer nearly as much as shareholders who are still holding their positions.