After notching its biggest gain in weeks yesterday, the Dow Jones Industrial Average (DJINDICES:^DJI) is taking a breather this morning. Stock index futures as of 7 a.m. EDT point to a tiny 10-point dip at the opening bell. European and Asian markets are also little changed as investors look ahead to the Bureau of Labor Statistics' critical Employment Situation Summary, due for release tomorrow morning.

Jobs data on tap
The report is expected to show that the U.S economy added nearly 200,000 jobs and that the unemployment rate held steady at 7.4%. While that's a big improvement from the peak we saw three years ago, it's still higher than the 6.5% that the Federal Reserve has targeted. 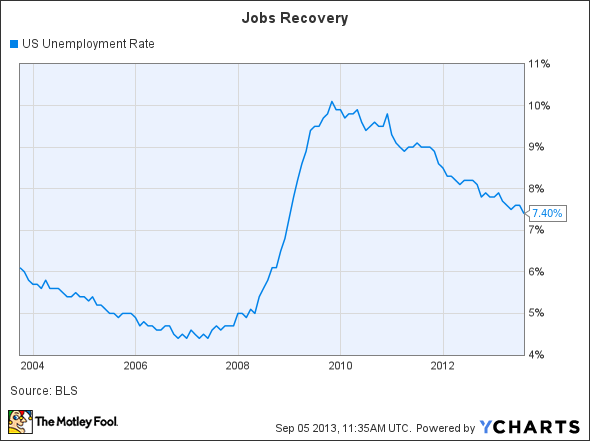 Beyond the headline numbers, investors will get important details on jobs growth within various sectors. Retailing, for example, has been a major bright spot, adding better than 350,000 jobs over the last 12 months. Meanwhile, employment in the health care and construction industry hasn't been rising nearly as fast.

Company news
Costco (NASDAQ:COST) has been busily hiring lately. The company kept up its outperformance in August, announcing solid sales growth for the month this morning. Comparable sales ticked higher by 4%, outpacing the 3.8% that analysts were expecting. Revenue for Costco's quarter ending Sept. 1 was $31.8 billion, or 1% higher than a year ago. The warehouse retailer's shares never seem cheap, but at 24 times earnings they aren't particularly expensive right now, either. Shares are up more than 1% in premarket trading.

Meanwhile, LinkedIn (NYSE:LNKD.DL) continues to trade actively in the wake of its plan to issue more common stock. The professional-networking site said last night that it will offer $1.2 billion worth of shares to the public, or 20% more than it originally indicated. Existing shareholders stand to have their ownership diluted by 4%, but I'd be more concerned about what LinkedIn plans to do with all of that extra cash. It makes sense for the company to invest in its business or even keep a pile money on its balance sheet for a rainy day. A big acquisition, on the other hand, could complicate its growth thesis. Shares are down almost 2% in premarket trading.