Liquidity and leverage constraints are stretched to the limit.

The second quarter saw a sharp spike in interest rates, which caused havoc in the mortgage REIT sector. As inevitable book value losses became the norm, it became a question of which mREIT could get away with the least damage.

Hatteras Financial (NYSE: HTS) was one of the worst performers during the period despite following a relatively conservative strategy of investing mostly in adjustable-rate mortgage (ARM) mortgage-backed securities, as opposed to fixed-rate 30-year MBSes that can often carry a larger interest rate risk.

This is bad by any standard, but what makes it even worse is that Hatteras is known to have a relatively defensive portfolio when compared to its fixed-rate focused peers; at the end of the second quarter, ARMs comprised almost 89% of Hatteras' MBS portfolio. Capstead Mortgage (CMO), a mortgage REIT that follows a similar strategy of investing in ARMs, reported that its book value per share declined by just 3.8% because of market price movements.

In terms of book value loss, Hatteras' performance can be compared to that of ARMOUR Residential (ARR 1.02%), whose book value per share declined by 19% from the previous quarter. However, ARMOUR Residential follows a strategy of investing primarily in long-duration fixed-rate MBSes, which can carry much larger interest rate risk.

What went so wrong?
To understand why Hatteras' Financial underperformed its peers in terms of book value losses, you have to understand the concept of basis risk.

Simply put, basis risk is the risk that the hedges may not move in an equal and opposite direction to the underlying asset. In this case, this translates to a risk that mortgage rates rise more sharply than the benchmark interest rate. Since the value of the hedges is usually tied to a benchmark index such as the 10-year Treasury note, a widening spread between mortgage rates and Treasury yields is generally negative for mortgage REIT book values.

The following chart from Hatteras Financial shows how the spreads widened in the second quarter. In the chart above, you can see that ARMs generally underperformed fixed-rate MBSes in terms of a widening spread. And within ARMs, the 7/1 hybrid ARM was by far the worst performer.

Unlike Capstead Mortgage, which invests mostly in shorter duration and seasoned 5/1 ARMs, Hatteras has a significant exposure in 7/1 hybrid ARM securities. The following chart shows the composition of Hatteras' hybrid ARMs portfolio in terms of the remaining months to reset as of June 30, 2013. 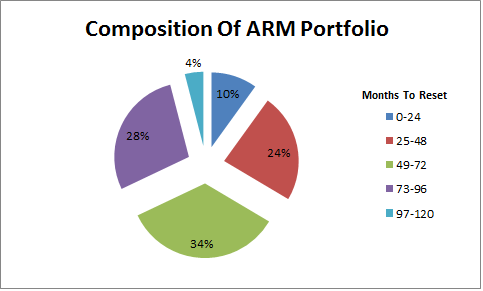 The chart shows that Hatteras is heavily exposed toward hybrid ARMs that have a reset period of five years or more. Thus, the sharp spike in the 7/1 ARM spread toward the end of the quarter combined with Hatteras' large exposure toward longer duration ARMs explains much of the decline in Hatteras' book value per share.

This leaves Hatteras living on the edge
The good news from Hatteras' earnings report is that despite the steep book-value loss, the company was able to maintain the size of its interest-generating assets; the company's average earnings assets increased by $0.7 billion during the quarter to $24.8 billion, and Hatteras increased its hedges by the same proportion.

However, this has left the company stretching its limits in terms of liquidity and leverage.

Hatteras' leverage increased to 9.3 times in the second quarter, from just 7.4 times in Q1, and management may not let it go much higher. CEO Michael Hough admitted in the earnings call that Hatteras' liquidity position is approaching the lower end of their target range.

Thus, the second quarter leaves Hatteras walking a tight rope. If rates rise and/or spreads widen any further, Hatteras would have to cut down the size of its portfolio at potentially unattractive prices in order to maintain an appropriate level of leverage and liquidity. Reducing the portfolio size could also result in lower core income and potentially lead to a dividend cut.

A similar situation can already be seen unfolding at ARMOUR Residential; the company reported that it had to sell agency securities worth $4.2 billion just in the month of July for a realized loss of $0.2 billion in order to maintain a reasonable level of leverage.

Foolish bottom line
Going forward, Hatteras' future depends a lot on macroeconomic circumstances. There is a growing expectation that the sell-off in the hybrid arm market is overdone, and the chances of spreads widening any further are limited. Recent insider buys from the company's top management could support this view.

However, if the sell-off in the bond market continues as a result of improving macroeconomic fundamentals, Hatteras could be forced to sell parts of its portfolio in order to maintain reasonable leverage and liquidity. Therefore, your decision to buy or sell Hatteras Financial should take into account your view on the future direction of interest rates.

Zain Zafar has no position in any stocks mentioned. The Motley Fool has no position in any of the stocks mentioned. We Fools may not all hold the same opinions, but we all believe that considering a diverse range of insights makes us better investors. The Motley Fool has a disclosure policy. Is this post wrong? Click here. Think you can do better? Join us and write your own!