The world's largest retail business pays a middle-of-the-road dividend yield today. How did the Wal-Mart stock get there, and where is it going next?

Today, I'm looking at retail king Wal-Mart (WMT 0.43%). Sam Walton's store chain offers investors a modest dividend yield of 2.5% today, which is just below the 2.7% average yield among the 30 Dow Jones (^DJI 0.45%) members. However, it's actually a pretty generous payout in the context of Wal-Mart's long term dividend history: 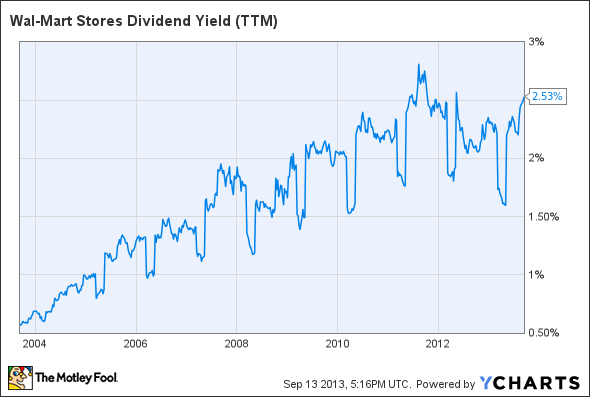 It's not that Wal-Mart doesn't boost its dividend checks on a regular basis. In fact, you can set your clock by its payout increases. The company hardly even skipped a beat in the 2008 market crisis.

However, as reliable as Wal-Mart's annual dividend boosts may be, they tend to come in small packages. The next chart shows you how fellow Dow member Intel (INTC -1.11%) has crushed its dividend accelerator pedal over the last decade, while Wal-Mart has only adjusted its cruise control a bit. 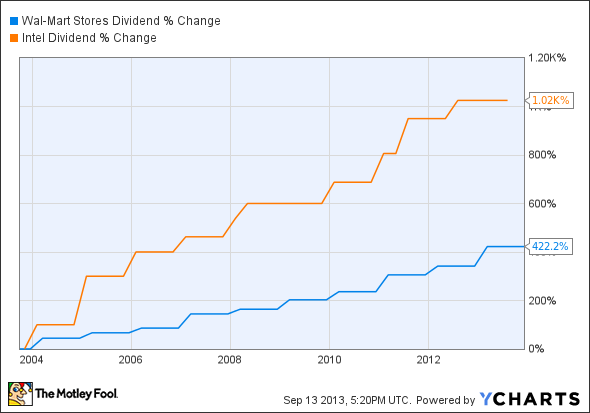 Intel has increased its dividend by an average of 18% a year since 2003. Its annual payment hikes average out to 27%.

The difference between these two squiggles explains why Intel gives investors a 4% yield today while Wal-Mart lags far behind. This would be forgivable if Wal-Mart were under fundamental pressure to preserve its cash flows, which tends to put the brakes on dividend increases. But the retail empire uses just 49% of its free cash flows to fund quarterly dividend checks -- in the same ball park as Intel's 45% cash payout ratio.

Looking ahead, I don't expect Wal-Mart to suddenly put the dividend-boosting pedal to the metal. The business model is very mature, and the law of large numbers plays a big part here. If anything, Wal-Mart's payout increases may have to slow down at this point. Fundamental metrics like revenue, net income, and free cash flows are all growing more slowly than Wal-Mart's long-term dividend increases. 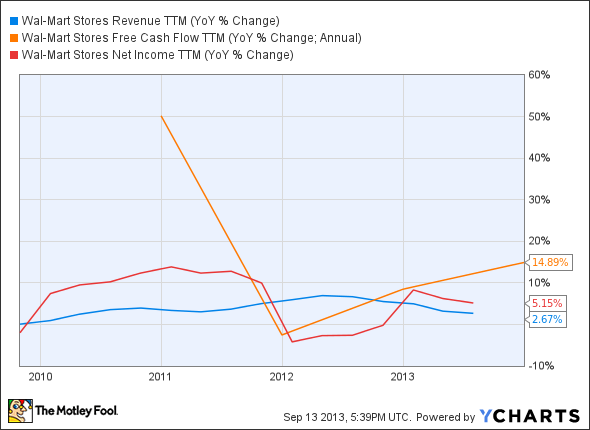 Fool contributor Anders Bylund owns shares of Intel, but he holds no other position in any company mentioned. Check out Anders' bio and holdings or follow him on Twitter and Google+.