As the importance of higher education becomes ever more apparent, long-term college enrollment will continue to grow. It is that growth that will drive the growth of the purpose-built student housing industry and its major players, American Campus Communities (NYSE:ACC), EdR (NYSE:EDR), and Campus Crest Communities (NYSE: CCG).

Although college enrollment has risen to all-time highs this decade, on-campus student housing as a percentage of student population has continually declined. In 2012, the estimated pent-up demand for beds was more than 1.5 million nationwide. Over the long term, this trend will continue. The Department of Education projects that overall U.S. college enrollment with grow by 2.3 million students from 2013 to 2021, reaching a total of 24 million students nationwide. This higher enrollment will cause the pent-up student housing demand to grow to more than 1.8 million beds. 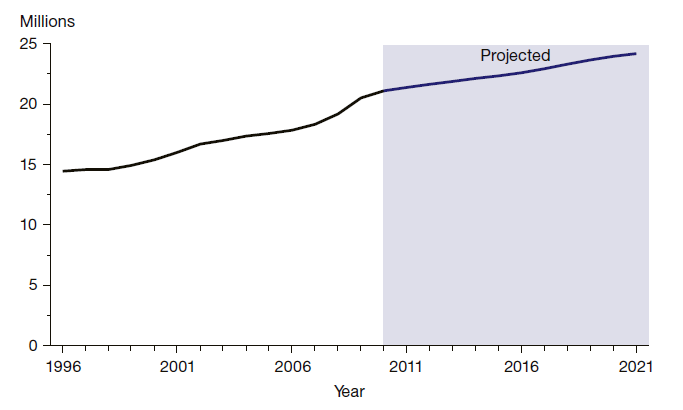 The three real estate investment trusts, or REITs, each have the same basic business model of developing, building, and operating student housing communities across the United States and parts of Canada.

American Campus Communities is by far the industry's largest, operating 164 properties in 82 university markets with more than 100,000 total beds. American Campus is also a key player in the growing on-campus scene, with properties at major universities such as Princeton and Texas A&M.

The industry's No. 2 player, although much smaller than American Campus, is by no means a minor operator. EdR (likely better known by its former name, Education Realty Trust) has a total of 47 wholly owned communities with more than 26,800 beds, and another 23 managed communities with about 12,000 beds, including on-campus development at the University of Kentucky.

Of the three, the youngster may be the most interesting. As far as student housing operators go (which, granted, is not very far), the 9-year-old Campus Crest Communities is fairly innovative.

These units have apartments as large as four-bedroom duplexes with private beds and baths, and amenities such as rooftop pools overlooking the city, state-of-the-art 24-hour fitness centers, two-story study lounges with meeting rooms, biometric security inside and outside of the buildings, and full-service coffee bars to give residents their early morning or late night caffeine fixes. Oh, to be 18 again.

Foolish takeaway
The student housing REITs have had a particularly rough 2013, with shares of American Campus, EdR, and Campus Crest respectively down about 26%, 15%, and 19%. With total college enrollment projected to grow 15% from 2010 to 2021, however, and purpose-built student housing expected to remain in low relative supply and high demand, this year's share price drops could be a good entry point into the promising long-term growth of the student housing industry.