On average, 10% of America's generation and transmission assets are used less than 400 hours per year. These assets sit around waiting for peak demand.

At the same time, the nation's growing renewable generation is intermittent. With no sun or wind, these assets can't supply our needs. Not only that, but when the sun is shining or the wind is blowing, much of the energy generated is wasted. The problem is that we just can't economically store electricity. That is until now.

Privately held Eos Energy Storage is just starting to ramp up production of its low-cost zinc hybrid cathode battery technology. It's designed to integrate renewable energy production, increase the electricity grid's efficiency and resiliency, while at the same time lower the costs for utilities and for consumers of electricity. It could just be the biggest invention this decade.

What Eos Energy Storage has done is create a system that can store energy at a disruptive price. Its zinc-based batteries can be recharged during off-peak times and used during peak demand. Best of all, its batteries should last thirty years.

EOS has managed to solve many of the historic problems of battery technology. Previous issues include corrosion, electrodes changing shape and limited power. By rebuilding the battery from the ground up, EOS believes it has solved each challenge, while doing so cost effectively.

That said, the technology has yet to be tested in a real-world setting. That will change as the company will soon be running a pilot program with Consolidated Edison (NYSE:ED) in New York City. It also has several utility partners that will be coordinating future projects as EOS scales up its manufacturing capacity. Some of these partners include NRG (NYSE:NRG), which is also an investor in EOS, and National Grid (NYSE:NGG).

The technology has incredible potential and a range of uses. One of the more intriguing uses will be to help enhance the profitability and adoption of renewable generation. For example, solar or wind energy can be stored to be used during peak times.

This will also reduce the need for additional natural gas-fired turbines that are traditionally needed to supply power during times of peak demand. As the following slide shows, an EOS system projects to be much cheaper than natural gas in supplying peak energy demand. 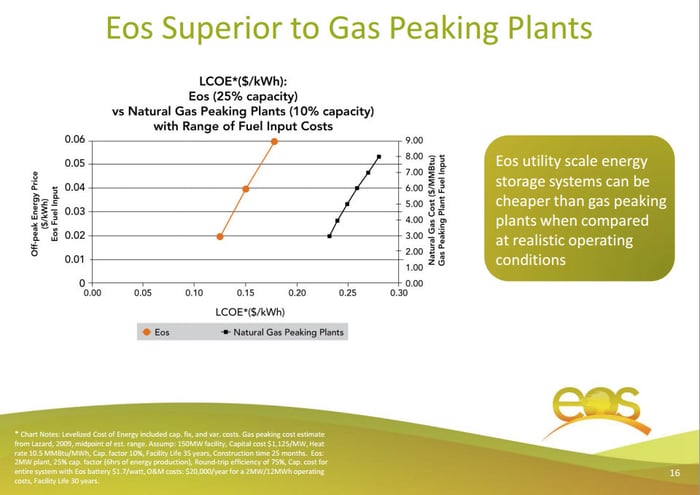 This year will be the first big test for the technology. That makes the pilot project with Consolidated Edison, as well as future projects with NRG and National Grid, an important next step for the technology. If successful, the addressable market is in the hundreds of millions of dollars.

The utility grid is ripe for innovation and battery storage technology could disrupt the power industry for years to come. It has the potential to lower the cost of electric and also reduce emissions. That is why investors should keep this emerging technology on their radar.

Is THIS the Biggest Invention of the Decade? @themotleyfool #stocks $ED $NGG $NRG Next Article
Current