With the Call of Duty series sticking to the same basic formula for years, the newest entry has received the lowest Metacritic score in franchise history. With sales having peaked in 2011, Activision Blizzard's cash cow is in danger given rising competition from Electronic Arts' Battlefield series. Perhaps Activision should take a page out of Take-Two Interactive's handbook.

Every year since 2007, Activision Blizzard (NASDAQ: ATVI) has released a new Call of Duty video game for the major game consoles and the PC. With the franchise selling more than 130 million copies, starting with the 2007 game Modern Warfare and excluding the most recent release, Call of Duty has become one of the most successful and profitable video game franchises of all time.

But how long can it last? A common criticism of the series is that each new game follows the same basic formula as the last one, and that very little is changed from the previous title. With formidable competition from Electronic Arts' (EA 3.59%) Battlefield series, it looks like Call of Duty's reign may soon be coming to an end.

More of the same
Both the Call of Duty and Battlefield series were born on the PC, but the PS3 and Xbox 360, with 160 million total consoles sold, offered an enormous audience to both Activision and Electronic Arts. Activision released Call of Duty 4: Modern Warfare in 2007, selling more than 16 million copies, and every year since then a new Call of Duty game has been released. Sales have increased dramatically over the years, with the 2011 release of Modern Warfare 3 selling 28 million copies.

But both sales and quality have started to fall off, with 2012's game selling fewer copies and critics giving the newer games in the series lower scores: 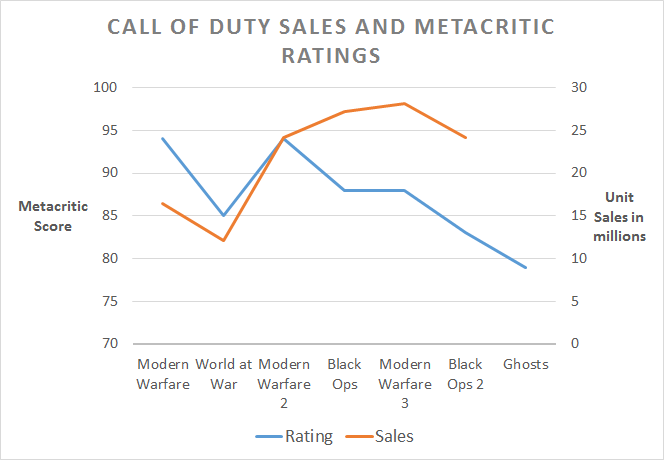 Ghosts was released recently so sales aren't yet comparable to older games in the series, but the game was given a lower score from critics than any Call of Duty game before it. While Ghosts will still sell enough copies to be one of the best selling games of the year, it will likely continue the sales downtrend started in 2012.

The problem that Activision faces is simple. Making any significant change in the Call of Duty franchise could ruin it as a cash cow for the company if gamers don't like the changes. On the other hand, churning out similar games every year will eventually end in the series losing its luster, and that appears to be already happening.

Call of Duty accounts for a significant portion of Activision's revenue, and the last thing the company wants to do is change a winning formula.

Quality over quantity: Take-Two Interactive's approach
The Battlefield series from Electronic Arts made the jump to consoles in 2008 with Battlefield: Bad Company. The game only sold 2.7 million copies, but the sequel in 2010 more than doubled this number. Then came Battlefield 3 in 2011, a game which proved hugely popular by selling 16.1 million copies. Battlefield 4 was released at about the same time as Ghosts, so meaningful sales numbers won't be available until after the holidays.

One big difference between Call of Duty and Battlefield is that Electronic Arts doesn't plan to create a new game every year, instead opting for an every-two-years approach. Activision's every-year approach with Call of Duty is likely the reason that the games are being increasingly poorly reviewed, since a fundamental shift in game-play can't happen in just a year.

Instead, graphics are updated and small changes are made, but each new game is essentially a clone of the previous game. With two years of development time, the Battlefield series has the ability to make each new game a big advance over the previous one.

A game franchise like Grand Theft Auto has staying power because the developer doesn't try to milk the series by releasing new games every year. Call of Duty, I believe, will eventually fade away, taking Activision's top and bottom lines with it.

The bottom line
Call of Duty, while still wildly popular, is in the process of losing its status as a must-have game every year. Years of pushing out games which follow the same formula has opened the door to competitors like Electronic Arts' Battlefield series, and I suspect that the new console generation will not be dominated by Call of Duty like the last one.

Why Bed Bath & Beyond Stock Lost 36% in September