James Akata
(AddValue)
Author Bio
I am an analyst with over 15 years investment experience. I also manage my family's diversified investment portfolio. My areas of coverage include various industries with focus on value stocks and misunderstood stocks that are undervalued. I am especially interested in long positions.

Current and foreseen water shortages in several parts of the U.S. and other parts of the world have increased the significance of water consumption when it comes to agricultural production. Most farmers would tell you that every drop of water matters and, as such, they are settling for advanced irrigation technologies and systems that ensure water use efficiency without negatively impacting crop yield.

This is where Lindsay Corporation (NYSE:LNN) comes into the picture. Lindsay is one of the global leading providers of irrigation and water management systems, and road infrastructure products and services. Concerns over drought conditions, focus on the need for increased crop yield, and increased farm income have resulted in higher demand for Lindsay's irrigation products in the U.S. and international irrigation markets.

My interest in the company is that it is both profitable and shareholder-friendly. Over the years, Lindsay has significantly returned money to shareholders through earnings and yields. With what is currently playing out in terms of increasing population, increasing demand for farm produce, and water shortages, shareholders should expect continued healthy returns.

Lindsay's position in the global irrigation market
The global irrigation market is valued at approximately $5.6 billion. In terms of sales of pivots and laterals, Lindsay maintains an estimated 30% of the global market share, following behind Valmont Industries (NYSE:VMI), which maintains approximately a 43% share of the market. Valmont's technological advancements in the Agricultural industry have not gone unnoticed as its Valley SoilPro 100, a soil moisture monitoring technology, recently won an AE50 award from the American Society of Agricultural and Biological Engineers (ASABE).

Valmont is not done on same technology as it recently announced its collaboration with AquaSpy to offer farmers a more advanced soil moisture monitoring technology, Valley SoilPro 1200. This product is designed to help farmers determine how much to water and in turn, results in higher yields and cost savings for the farmers.

Although American Water Works Company (NYSE:AWK) is a pure-play and operates in a different industry (water utilities), it is also positioned to benefit from the events already playing out. This will especially play out in its regulated businesses segment as the increasing population and expanded food production activities lead to a rise in the demand for its water and wastewater services. Presently, approximately 14 million people benefit from the services rendered by American Water Works, with the number projected to increase significantly as the population increases. 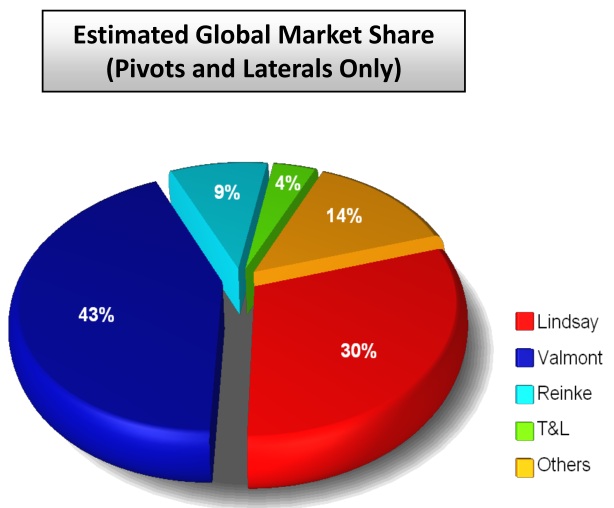 Positive catalysts for shareholder returns
Strong balance sheet: With the successful retirement of its long-term debt of $4.3 million, Lindsay has further strengthened its cash position as it currently maintains zero debt. This will position the company to further improve returns to shareholders through increased dividends, synergistic water-related acquisitions and possible share buybacks.

Record achievement of long-term goals: With its strong management team, Lindsay has set and successfully achieved several of its long-term goals. The company not only achieved its set goal of 10%-15% annual revenue growth, it exceeded the percentage by approximately 10% as it reported 25% revenue growth for fiscal year 2013 in comparison to 2012. It also exceeded its operating margin and return on net assets goals.

Risks of the investment

Final thoughts
With its continually improving operational efficiency and accretive acquisitions, Lindsay is well-positioned to continue growing its earnings, especially considering its increasing backlog and the unfolding events surrounding water shortages and increasing population. Those who invest now will surely benefit from these positive catalysts at a significant discount.