It's not enough that Darden Restaurants (NYSE:DRI) is planning some sort of strategic separation of its Red Lobster chain: Barington Capital says the proposal is a halfhearted measure that fails to maximize the significant value of the company's real-estate assets.

Since last October the hedge-fund operator has been agitating for the restaurateur to slough off not only its seafood concept but also its Olive Garden chain. Barington Capital estimated the creation of a real estate investment trust for the $4 billion in assets Darden holds would help unlock shareholder value.

The restaurant operator essentially said thanks but no thanks. It agrees the lagging Red Lobster chain could probably do better in someone else's hands, which is why it's willing to enter talks to sell it or spin it off, but it still sees recovery potential in Olive Garden -- and establishing a REIT offers only limited "value creation opportunity" because it would likely trade lower than other REITs, so the plan doesn't make sense.

It also might not want to give up the bulk of its revenues, either. While Barington sees newer, smaller concept restaurants like The Capital Grille, Bahama Breeze, and Yard House as the places where future growth will take place, Olive Garden accounted for nearly 43% of second-quarter revenues and together with Red Lobster represents 70% of the total. 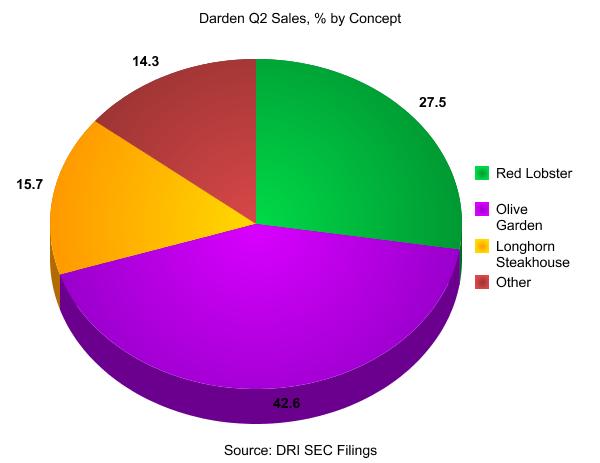 But Barington counters that for all the benefits Darden has stated it can achieve separating from Red Lobster, it can get similar results by including Olive Garden in the mix. "We view [Darden's] overall plan as incomplete and inadequate," the hedge fund operator said, and believes the proposal is "more of an attempt to do the minimum necessary to maintain the status quo."

While Barington has an ally in Starboard Capital, which also took a significant position in the restaurant operator in December and is looking for Darden to use its real estate holdings to unlock shareholder value, not everyone believes the strategy is best.

When the hedge fund first announced its intentions last year, the Fool's Rick Munarriz compared Darden's "table service dinosaurs" to new fast-casual concepts like Potbelly and Noodles & Company and found the plan to split up Darden came up short. As the industry analysts at NPD Group have pointed out, restaurant traffic was flat last year, except at fast-food and fast-casual chains, where they saw traffic jump 8% for the 12-month period ending in September. But the rest of the restaurant market -- meaning casual dining, mid-scale, and family dining -- haven't had any gains at all, or more accurately, experienced sharp declines. If that's all Darden will have at the end of a breakup -- only a lot smaller -- it suggests only the hedge funds will really benefit from the split.

But that doesn't mean Barington is altogether wrong. The Darden portfolio with its seven dining concepts is all over the place, and more focus is certainly in order. A dividend might be an appropriate capital-allocation policy for mature brands like Red Lobster and Olive Garden, and the specialty restaurants would benefit from the capital infusion they'd get without the underperformance albatross those chains provide. But Yard House might be an interesting IPO all on its own, and the rest of the portfolio could be divided into other pieces as well.

There's definitely value hidden away in Darden's diverse brands, but it doesn't seem either management or the hedge funds have hit on the best possible solution yet.

Darn It, Darden, You Gotta Do More! @themotleyfool #stocks $DRI Next Article
Current