In the biotech world, risk-taking investors generally like two kinds of stocks -- speculative ones with huge growth potential and beaten-down ones that have been abandoned due to regulatory actions or safety concerns.

In this article, I'll focus on two of these broken biotechs from 2013 -- Ariad Pharmaceuticals (NASDAQ: ARIA) and Amarin (NASDAQ:AMRN) -- and discuss whether they can bounce back in 2014.

Ariad: Can Iclusig sales bounce back amid major safety concerns?
2013 was a brutal year for investors in Ariad, the maker of the blood cancer drug Iclusig.

Iclusig was approved in December 2012 for patients with two rare types of chronic myeloid leukemia (CML) who have failed traditional treatments such as Novartis' (NYSE:NVS) Gleevec. Both Iclusig and Gleevec were developed by Dr. Brian Druker, one of the most well-known figures in hematology.

Ariad's stock soared nearly 850% for five years, but it crashed on Oct. 9, 2013, after the FDA placed a partial hold on patient enrollment for trials of Iclusig, due to several patients experiencing blood clots and possible heart damage. 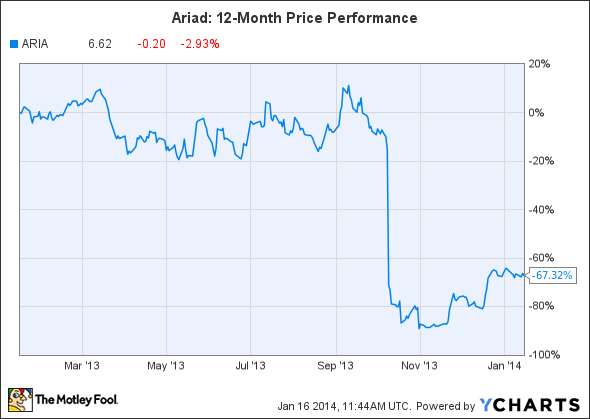 Twelve percent of the patients developed blood clots after 24 months, while 6.2% reported events that could cause heart damage. Further data revealed that approximately 24% of patients in a phase 2 trial and 48% of patients in a phase 1 trial experienced serious adverse vascular events, including heart attacks, stroke, loss of blood flow to the extremities, and narrowing of blood vessels. Heart failure occurred in 8% of the patients in the phase 2 group, resulting in several fatalities.

That data led to the drug being pulled off the U.S. market on October 31, triggering additional safety reviews in Europe from the CHMP and the EMA. Original peak sales estimates for the $115,000-per-year drug, which ran as high as $1.4 billion by 2023, suddenly looked absurd.

In response, Ariad laid off 40% of its workforce to reduce costs by $26 million in 2014 and adopted a poison pill plan to prevent a hostile takeover.

Besides the obvious reasons for selling Ariad, investors abandoned the stock due to other weaknesses:

However, that doesn't mean that Ariad is down for the count yet.

On December 20, the FDA allowed Ariad to resume marketing of Iclusig with a revised label, and the drug is expected to relaunch this month. The drug has continuously remained on the market in Europe.

Ariad has roughly tripled since bottoming out on October 31, but it may still have room to run, considering that it's still the cheapest the stock has been since March 2011. Although original peak sales estimates for Iclusig might have been too high, the stock could make a comeback in 2014 as operations normalize.

Amarin: Still stuck between a rock and a hard place...
Another beaten-down stock to watch is Amarin, another stock that fell off a cliff in October.

Amarin was squeezed between a rock and a hard place throughout most of last year. The fish oil treatment Vascepa, the company's only drug, was approved in 2012 to treat severe hypertriglyceridemia (triglyceride levels equal to or higher than 500 mg/DL) in patients not taking statins. 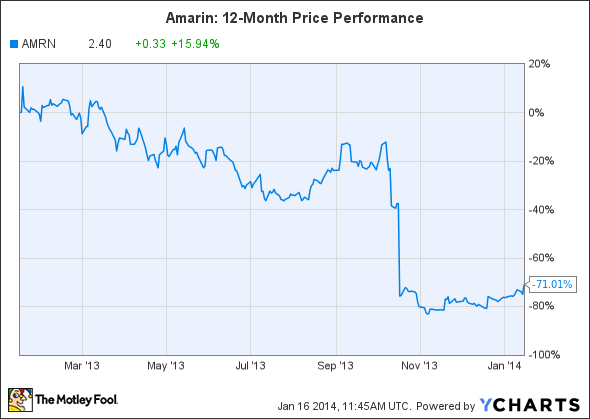 The main problem was competition from GlaxoSmithKline's (NYSE:GSK) drug for the same indication, Lovaza, which was more widely recognized and backed by more marketing muscle. Vascepa didn't raise "bad" LDL levels like Lovaza did -- but Lovaza, which was approved eight years earlier, already had too much of a head start.

Amarin has only generated $16 million in Vascepa sales since the drug was launched in the first quarter of 2013. By comparison, GSK reported $728 million in Lovaza sales over that same period.

Amarin's plan to escape the fragmented severe hypertriglyceridemia market was to gain approval for patients with elevated levels of triglycerides (equal to or higher than 200 mg/DL but lower than 500 mg/DL) who were also taking statins -- an indication that could help Vascepa reach 20% of the U.S. population and escape the crushing pressure of Lovaza and its upcoming generic competitors.

Unfortunately, things didn't work out -- an FDA advisory panel recommended against the additional indication, referred to as ANCHOR, on October 16. Although that recommendation didn't guarantee a rejection, Amarin laid off half of its global staff to prepare for the worst.

Without the ANCHOR indication, Amarin's only hope is REDUCE-IT, an early phase 3 trial for Vascepa as a treatment for cardiovascular events that isn't expected to be completed until late 2017.

Yet there could be a silver lining on all those dark clouds.

On January 15, the FDA notified Amarin that the company's request for reconsideration of the October 2013 decision to rescind the ANCHOR clinical trial SPA (Special Protocol Assessment) agreement would be delayed. If the FDA reconsiders the rescinded agreement, it could possibly allow Amarin to reinstate the original SPA agreement to obtain the ANCHOR label expansion.

For now, that possible reconsideration is Amarin's only real short-term catalyst, and shares will likely remain volatile until a decision is reached.

The Foolish takeaway
In closing, Ariad clearly has a better chance of bouncing back than Amarin in 2014.

Although peak sales estimates will likely be readjusted after U.S. and European safety concerns, the storm seems to have passed for Iclusig. Amarin's future, on the other hand, hinges on yet another FDA decision -- one that could prove that there is still hope for the ANCHOR indication. For now, the FDA delay has paralyzed both the bulls and the bears, who now have no idea what to expect.

Ariad and Amarin are stocks for more speculative investors who can stomach the volatility. However, the rewards (or losses) for both stocks could be huge in 2014.