B/E Aerospace is one of the most attractive stocks in the aviation sector, but can its fly high again in 2014?

Shareholders in airplane cabin manufacturer B/E Aerospace (BEAV) watched their stock rise more than 75% in 2013, so the recent sell-off shouldn't come as a surprise. Unfortunately, stocks can't go in one direction forever. The question facing investors now is whether the recent fall presents a buying opportunity or not?

B/E Aerospace still headed for a great year
First things first, there was nothing in B/E Aerospace's recent fourth-quarter results to suggest that the company is not going to have a great year in 2014. Although, internal EPS guidance of $4.25 was below analyst consensus of $4.34, it still represents earnings growth of nearly 20%. Moreover, the International Air Transport Association, or IATA, recently upgraded its forecast for airline profitability in 2014.

The contract announcements were obviously good news, and the ramp up in lavatory systems shipments (the first system was shipped as recently as the third quarter) is a confirmation of strong demand for an exciting new product.

However, the move into the oil and gas consumables market is more subject to scrutiny. When questioned on the conference call, B/E's CEO, Amin Khoury, argued that the oil and gas consumables services business is four times the size of its opportunity in aerospace, and is growing twice as fast with similar margins. Moreover, he sees it as reducing the volatility in the business, because prospects for oil and aerospace are inversely related.

Unfortunately, this argument looks weak. The reality is that airline profitability is cyclically based on the economy, and the price of oil is too. Moreover, airlines have got a lot better at dealing with high oil prices then in the past. All told, the move looks likely to increase cyclicality rather than reduce it, but this doesn't mean it is a bad idea!

Valuation, valuation, valuation
All told, BE is headed for a strong year, but the problem is that its valuation has largely priced this in. In order to look at the kind of assumptions made in its stock price, consider that BE only converted 61% of its net earnings into free cash flow in 2013, and management forecasts only around 65% for 2014.

Assuming that 65% of earnings are converted into free cash flow on a long-term basis, and plugging in analyst estimates to 2017, gives the following estimate of its free cash flow. Its current share price is $79.4 with an equivalent enterprise value (market cap plus debt), or EV, of $96. 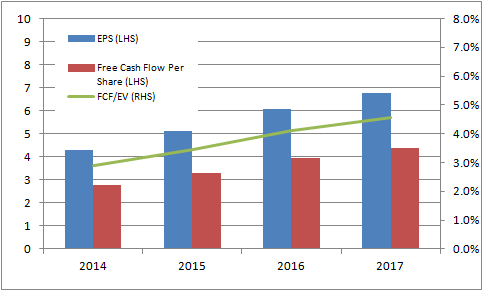 Unless its free cash flow conversion gets markedly better in future years, or its earnings are better than consensus forecasts, it's hard to see how B/E is a good value. Indeed, B/E has struggled with cash flow conversion in the past. The essence of the issue is that working capital requirements and inventory always goes up in order to service new orders.

Where next for B/E Aerospace?
The valuation doesn't look cheap and the assumptions needing to be made in order to make it look cheap are relatively optimistic. Based on the IATA outlook, there is certainly good reason to expect commercial aerospace to outperform in 2014, but who can predict where the economy will be in 2017?

Moreover, Fools need to appreciate that even if Boeing and Airbus have historically strong order books, if the economy turns down then orders will be cancelled and B/E will suffer. You can never fully discount risk. As attractive as the company undoubtedly is, it's hard to make a case for it based on anything other than earnings momentum.