In a fiercely competitive automotive industry, branding and customer loyalty is of great importance. The good news for Tesla investors is that its brand jumped in a recent survey.

The Dow Jones Industrial Average (^DJI 0.00%) was up 139 points, or 0.89%, in midafternoon trading despite a less than thrilling jobs report. The U.S. added 113,000 jobs in January, which was well below the nearly 190,000 that economists expected. In other disappointing economic news, forecasting firm Macroeconomic Advisers said it expects GDP to expand at a 1.9% annualized pace in the first quarter, lower than the 3.2% growth witnessed in the fourth quarter. With those trends in mind, here are some companies making headlines as the markets wrap up the first full week in February.

Shares of Boeing (BA -2.84%) have been flying high over the past year, until recently. 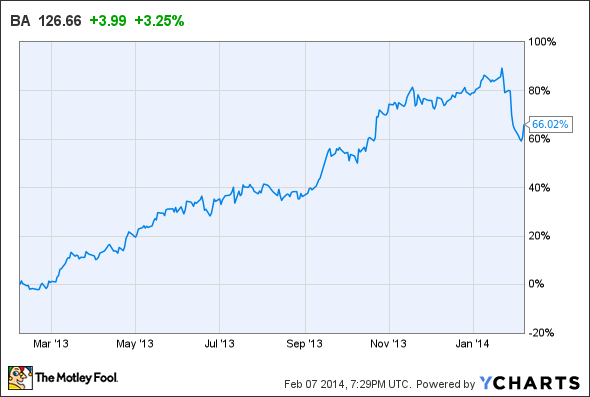 Bloomberg reported that Boeing is poised to win an order from SpiceJet that could be announced as soon as next week during the Singapore Airshow. The order from SpiceJet would consist of 38 737 Max jets valued at roughly $3.9 billion. In addition to the purchase value, this is good news for investors as SpiceJet was previously considering switching to Airbus, Boeing's major rival. There are also reports of interest in Boeing's next-generation 777X from British Airways and Ethiopian Airlines.

In other Boeing news, it appears the company's troublesome 787 Dreamliner has had another mishap. In 2013, the 787 Dreamliner global fleet was grounded for three months after batteries melted on two airplanes. Recently in Japan, another battery cell was found smoking during preflight maintenance. Investors would like to avoid any other mishaps that could deter customers from purchasing the advanced 787. Fortunately, the situation this week in which Air India diverted a 787 as a precaution after a software fault developed on the plane in midflight, seems to be a minor issue.

"We have already raised this issue with Boeing, and they are taking the measures needed to ensure that the problem is solved and it does not happen in the future," Praveen Bhatnagar, an Air India spokesman, said Thursday, according to The New York Times. "Since it is a new machine for them as well, it takes time to adjust to new issues."

Outside of the Dow, Tesla Motors (TSLA -0.84%) has been making a good impression on critics. Tesla broke into the top five brands in a survey by Consumer Reports, just the most recent in a long list of accolades for the relatively new electric vehicle manufacturer. Tesla's move to fifth place was a large jump from its 11th position last year. Toyota kept its No. 1 position in the survey, followed by Ford, Honda, and Chevrolet.

"Consumers are influenced by word of mouth, marketing and hands-on experience," Bloomberg quoted Jeff Bartlett, Consumer Reports deputy automotive editor, as saying in a prepared statement. "Perception can be a trailing indicator, reflecting years of good or bad performance in a category, and it can also be influenced by headlines in the media."